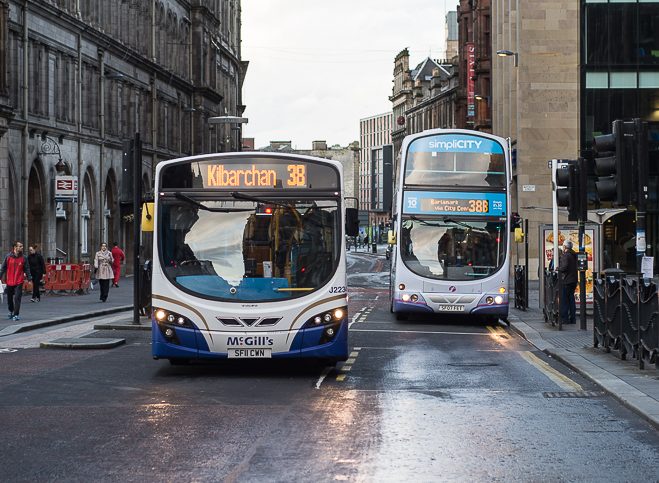 Buses must work for passengers, not just profit, urge campaigners

On the close of a consultation about the future of Scotland’s local bus services tomorrow (5 December 2017), transport campaigners and trade unions are supporting Scottish Government plans which will make it possible for more local councils to run and operate their own bus networks.

The bus sector is in crisis. In the last decade alone, companies have cut routes by a fifth and increased fares by a huge 50%. This consultation proposes to give Local Transport Authorities the power to take bus services into public ownership to operate highly-regulated franchises. Edinburgh’s bus services were not sold off in the 1980s and are widely praised for their quality and increasing passenger numbers.

“The bus sector is in a shocking state and needs a shake up, because buses play such a vital role in tackling air pollution, climate change, and transport poverty. People are being forced into car ownership across Scotland because the buses simply do not serve their area or are unreliable. With the right type of regulation and support, our bus networks can be expanded and fleets modernised, making the bus the smart choice for everyone.”

“Glasgow is being held to ransom by private bus companies. 45% of their income comes from public subsidies, yet they continue to cut vital services and hike up fares. While profits go to shareholders, the average age of a bus in Glasgow is over 10 years, belching out poisonous diesel fumes onto the most polluted streets in Scotland.

“We absolutely want a newly enhanced ‘Transport for Glasgow’ to be granted the powers necessary to run its own bus company, a new ‘Strathclyde Buses’. Glasgow must be given the support necessary to set up a bus company like Edinburgh’s successful and popular Lothian Buses. This bus company should be part-owned by Glasgow City Council and the surrounding Councils which presently make up Strathclyde Partnership for Transport and, most importantly, constituted so that all its profits are reinvested in expanding the region’s public transport network, improving reliability and reducing fares.”

Earlier this year it was revealed that 1 million people in Scotland lack access to essential services or work because of a lack of affordable transport options.

“Many of our members across Scotland find that even if there is a bus service near them, it can be expensive and often unsuitable for shifts starting very early or finishing very late.

“The success of Lothian Buses shows a way forward for re-regulation of our buses, with greater public ownership and control, helping to deliver the high quality, affordable, environmentally friendly bus services that people need.”

Friends of the Earth Scotland, Get Glasgow Moving, Unison Scotland, Unite Community, Haud the Bus, and We Own It, have an online action calling on the Government to allow for, and fund, councils to run their own bus operations

Transport Scotland Statistics show that last year 67 percent of trips to work were made by car, compared with 10 percent by bus. Bus passenger numbers fell from 476 to 393 million journeys since 2006, a fall of 17.4 percent. Bus fares have increased by 19 percent from 2010-2015. More info: https://www.transport.gov.scot/publication/26-september-2017-transport-and-travel-in-scotland-2016/

Sustrans Scotland estimated that 20% of people lived in areas at a high risk of transport poverty: https://www.sustrans.org.uk/blog/tackling-transport-poverty-scotland

Friends of the Earth Scotland is
* Scotland’s leading environmental campaigning organisation
* An independent Scottish charity with a network of thousands of supporters and active local groups across Scotland
* Part of the largest grassroots environmental network in the world, uniting over 2 million supporters, 75 national member groups, and some 5,000 local activist groups. www.foe.scot