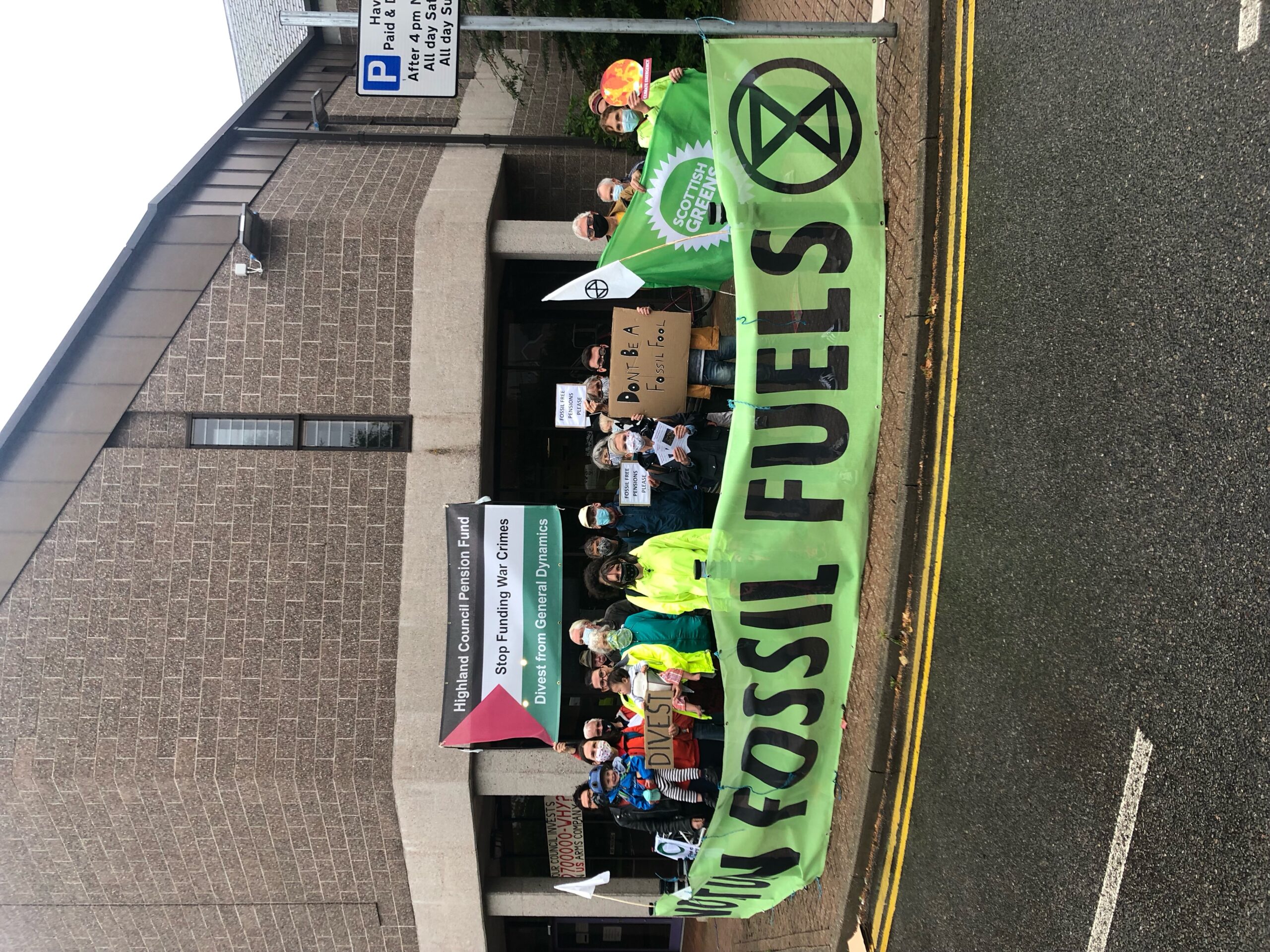 Highland Council has endorsed a plan that it claims will reduce the investments of its pension fund that are contributing to climate change, but campaigners are urging it to move faster.


The motion agreed to bring investments of its pension fund in line with the Paris Agreement by reducing the greenhouse gas intensity of its shareholdings. It was brought at a Highland Council meeting yesterday (9 September 2021) and was accepted unanimously after amendments were made to the original outline. The motion is clear that the Highland Council continues to work towards a carbon neutral Highlands by 2025, but less detail was provided on how its investments will change.

Councillors say that this year, the Highland Council Pension Fund transitioned about half its investments to be aligned with the Paris accord, and it has committed to deliver: “an approximate 7% year-on-year reduction in greenhouse gas intensity from its investments in line with the target reductions set out by the IPCC in 2018.”

Campaigners are waiting to see the current investment figures and urge the Pension Fund to move faster than 7% a year. The Paris Agreement is a global commitment to reduce carbon emissions to keep average temperature rise well below 2 degrees. Campaigners say the fund would need to stop investing the current £40 million in fossil fuel companies such as BP and mining giant BHP for this to be the case.

Locals protested outside the Highland Council building before the vote with groups including Friends of the Earth Scotland, Extinction Rebellion, Highland Palestine, Transition Black Isle, Assynt Development Trust, Highlands and Islands Greens and Kidical Mass outside the Highland Council building in Inverness to call on them to invest responsibly. They also handed in a petition with nearly 200 signatures calling on the Council to divest from fossil fuels companies. [link to images in notes]

The original motion tabled included removing funds from arms companies and other socially harmful industries, but in the amended motion the Council made no commitment to divest from these companies.

There is a meeting of the Highland Council Pension Fund Committee later this month where it has the opportunity to make the commitment to stop investing in fossil fuel companies, armaments and other harmful industries altogether. This would make the Highland Council a leader in fossil fuel divestment among Scottish councils. It will be the last chance to do so before the UN Climate Summit, COP26, which is being hosted in Glasgow in November.

“As a constituent and a Highland Council employee, I hate the fact that my pension contributions have been part of the £40 million Highland Council invests in oil and gas companies like BP and BHP which have such poor reputations when it comes to both greenwashing and to protecting indigenous communities. My colleagues are equally appalled that their salaries are funding continuing dangerous global warming. Highland Council declared a “climate emergency” in 2019 and the HCPF fossil fuel investment is a glaring inconsistency with its aspirations.”

Sally Clark, divestment campaigner at Friends of the Earth, said:

“The decision by councillors to reduce the greenhouse gas intensity of its pension fund investments is a very positive step, but there is more to do in order to set the Highland Council pension fund on a fossil free path.

“We are expecting that “Paris aligned” investments would not include fossil fuel companies, whose business model relies on worsening the climate emergency. We also need to see a more ambitious date for divestment reflecting our greater responsibility in countries like Scotland for causing the climate crisis.”

A spokesperson for Highland – Palestine, one of the groups involved in drafting the original motion and protesting outside the Council HQ yesterday, said:

“Highland – Palestine fully supported the motion proposed by Councillors Pippa Hadley and Maxine Smith. We share the concerns of people campaigning about the climate crisis, recognising, among other things, the role played by the world’s military in polluting and degrading the environment on a massive scale. Climate change poses a severe threat to life across the world and creates a serious risk of further military conflict.

“Highland – Palestine have been campaigning for a number of years about the pension fund’s holdings in the American arms company, General Dynamics, a company that is implicated in several incidents that are currently being investigated as war crimes. We believe it ought to be self-evident that a local authority pension fund has no business investing in a company that designs, manufactures and sells weapons that are known to have killed many tens of thousands of civilians, including, tragically, thousands of children.”

“We are, therefore, deeply dismayed that the amended motion made no reference to armaments, and, instead, endorsed the absurd notion that it is possible to ‘engage’ with the management of such companies. Last year, fund manager Pyrford International, acting on behalf of Highland Council Pension Fund, not only failed to challenge any of the motions at the General Dynamics shareholders meeting, but went so far as to endorse the $20 million dollar ‘compensation package’ handed to CEO and former CIA operative, Phebe Novakovic. What does that tell us about Highland Council Pension Fund’s ability to implement a socially and environmentally responsible investment policy?”

Debate on the motion available here: https://highland.public-i.tv/core/portal/webcast_interactive/595462 10i and 10ii.

Highland Council’s declaration of a climate emergency and commitment to achieve carbon neutral region by 2025: https://www.highland.gov.uk/news/article/12625/highland_council_recognises_need_for_green_recovery_to_meet_climate_change_commitments