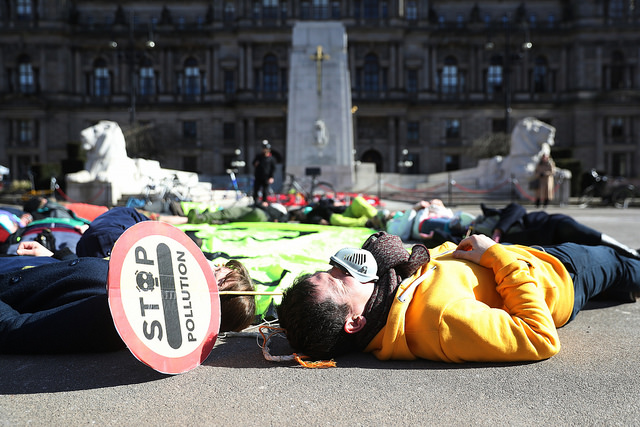 “The Scottish Government should consider the huge health benefits of early and transformative action on air pollution as they make up their minds on their climate targets, a new transport bill for Scotland, and progress with Low Emission Zones in Scottish cities. Our most vulnerable citizens either through ill health, age or poverty would benefit considerably from shifting our transport system away from the private car.

“Dealing with pollution hotspots in our major cities through low emission zones, coupled with investment in public transport, walking and cycling would reap significant rewards in reduced impact on the NHS as well as cutting climate emissions.

“Scotland’s air pollution causes over 2500 early deaths every year at a cost of £1.1bn in days lost at work and costs to the NHS.”

“Scotland’s desire to go further than the UK Climate Change Act could mean even bigger wins for public health in our towns and cities.”

1. FoES is calling for Scotland’s new Climate Change Bill to commit to net-zero emissions by 2040 https://foe.scot/campaign/climate-action/climate-bill/

2. Friends of the Earth Scotland is:
* Scotland’s leading environmental campaigning organisation
* An independent Scottish charity with a network of thousands of supporters and active local groups across Scotland
* Part of the largest grassroots environmental network in the world, uniting over 2 million supporters, 75 national member groups, and some 5,000 local activist groups.

3. Press Release from UK Health Alliance on Climate Change and The Lancet Countdown: Tracking Progress on Health and Climate Change

London, 27 April 2018. New analysis published in The Lancet Planetary Health today shows that meeting the UK’s Climate Change Act commitments could cut nitrogen dioxide (NO2) air pollution by 50-60%, contributing to improved public health and longer life expectancy. The Act requires the UK to reduce greenhouse gas emissions by at least 80% on 1990 levels by 2050.

In London, NO2 concentrations could fall by more than 50% by 2050. Significant particulate matter (PM2.5) reductions across the country are also expected by the study. Currently, around 29,000 premature deaths in the UK are associated with exposure to small particulate air pollution caused by wide range of sources, including for example road transport. Therefore, meeting the targets of the UK Climate Change Act could deliver significant health benefits.

Professor Martin Williams of the Environmental Research Group at King’s College London, the lead author of the study, said:
“This is the first study that compares the impacts of policy scenarios to reduce carbon emissions on health and life expectancy from changes associated with air pollution in the UK. Our research demonstrates that climate change mitigation policies have the potential to make dramatic improvements in public health through their parallel improvements in air quality. It is imperative that climate change and air pollution policies are considered together to fully realise the health benefits of both.”

Professor Helen Stokes-Lampard, Chair of the Royal College of General Practitioners (RCGP), said:
“Climate change is a clear risk to the health and wellbeing of the British population. As GPs, we are already seeing more patients presenting with illnesses exacerbated by poor air quality, particularly in vulnerable members of our communities. This study shows that an 80% cut in greenhouse gases will dramatically reduce air pollution – so, it makes sense to take urgent measures to achieve this. What is good for the planet is usually good for our patients’ health, and the NHS as a whole.”

Professor Dame Parveen Kumar, Chair of the BMA Board of Science, said:
“We are increasingly becoming aware of the multiple health impacts of air pollution, which has rightly been described as a national health emergency in the UK. The lethal levels of air pollution in our cities breach both WHO and EU regulations. This highlights that we have the means to address the air pollution crisis. The UK must retain and strengthen these regulations. The Climate Change Act is an example of how the UK’s leadership in acting on climate change can also improve health, reducing the burden on our over-stretched health services.”

Professor Jonathan Grigg of the Royal College of Paediatrics and Child Health (RCPCH) said:
“Children and young people benefit the most from improved air quality, as they are the most vulnerable to the impacts of air pollution. Tackling childhood asthma is particularly urgent given its prevalence – air pollution is associated with both reduced lung growth in childhood and severity of asthma for those with the disease. This study shows that the Climate Change Act is a powerful tool for reducing air pollution.”

Laurie Laybourn-Langton, Director of the UK Health Alliance on Climate Change, said:
“Climate change is already having a major impact on health in the UK, through increasing frequency of storms and floods. The Lancet Countdown study clearly shows that the health benefits of carbon emission reductions could be significant. More can and should be done to complement these reductions. Expansion of clean air zones together with increased investment in more sustainable modes of transport, like walking and cycling, could unlock huge health opportunities and economic savings through increased physical activity and cleaner air.”

• If you wish to provide a link to the study, please use the following, which will go live at the time the embargo lifts: http://www.thelancet.com/journals/lanpla/article/PIIS2542-5196(18)30067-6/fulltext

• Nitrogen Dioxide (NO2) is one of a group of gases called nitrogen oxides (NOx). NO2 levels are higher close to busy roads and in urban areas. Health effects are particularly linked to lung problems, including asthma. In addition to these direct health impacts, NO2 and sulphur dioxide (SO2) can form PM2.5 air pollution. Exposure to PM2.5 increases the risk of mortality from respiratory and cardiovascular diseases. Current indications are that PM2.5 and NO2 together contribute to around 40,000 premature deaths annually.

• The UK Health Alliance on Climate Change brings together the UK’s leading health institutions, including the Royal Medical Colleges, the Royal College of Nursing, the Royal Society of Medicine, the British Medical Association, the Faculty of Public Health, the Faculty of Sexual and Reproductive Healthcare, The Lancet, and the British Medical Journal. It advocates for responses to climate change that protect and promote public health. http://www.ukhealthalliance.org

• The Lancet Countdown: Tracking Progress on Health and Climate Change is a global, interdisciplinary research collaboration between 24 academic institutions and inter-governmental organisations. It monitors progress on the relationships between health and climate, and their implications for national governments, reporting annually. http://www.lancetcountdown.org