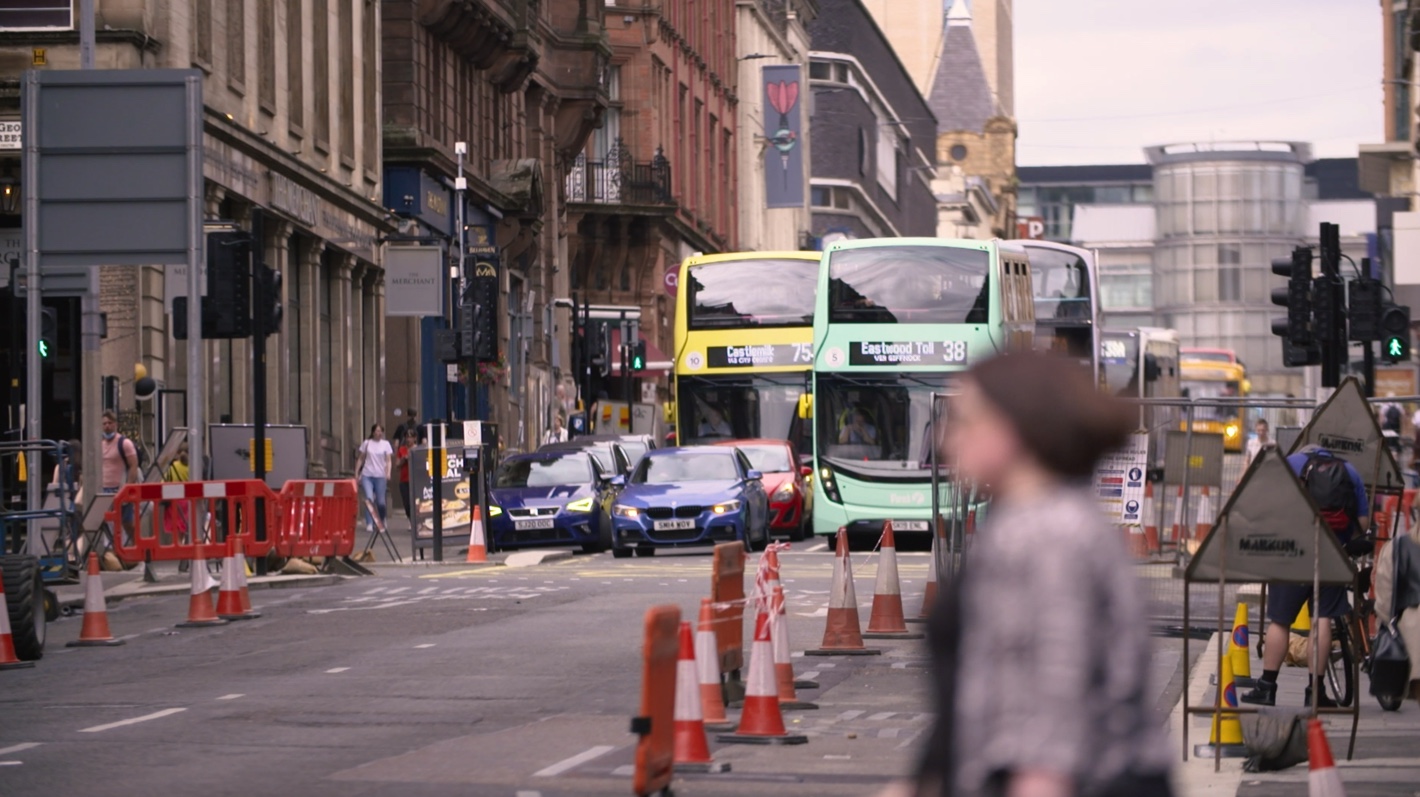 REVEALED: POLLUTION IN SCOTLAND REBOUNDS TO ILLEGAL LEVELS IN 2021

Scotland breached legal air quality limits in 2021 after a historic low in 2020 due to the pandemic. Hope Street in Glasgow recorded an annual average above the legal limit for diesel pollution, while many streets across Scotland saw pollution spike back up despite Covid-19 restrictions like working from home continuing through the year and the country being in lockdown for the first few months.

Friends of the Earth Scotland analysed official air pollution data for 2021, looking at two toxic pollutants which are primarily produced by transport. Legal air quality standards came into force in 2010, yet have been broken every single year since except 2020.

As traffic levels increased through 2021, air pollution rose correspondingly. While Hope Street in Glasgow once again breached legal air quality limits for nitrogen dioxide, other streets such as Salamander Street in Edinburgh and Atholl Street in Perth experienced increases in particulate pollution.

Campaigners say this data shows governments and councils have not done enough to reduce car traffic. Measures such as Spaces for People – brought in during lockdown to ease social distancing and create temporary cycle lanes and pedestrian spaces – were soon ripped out by councils like Edinburgh while other councils, such as Falkirk largely ignored the funding.

Air pollution kills 2,500 people in Scotland each year and puts the population at risk of serious health conditions, like asthma, heart attacks, and strokes. It’s especially harmful to children, the elderly, and people living in poverty or made vulnerable from other health conditions.

The European Ambient Air Quality Directive set a limit for Nitrogen Dioxide (NO2) of 40 micrograms per cubic metre. The deadline for this limit to have been met was 2010.

“Scotland once again has illegal air quality in 2021, which is shocking but not surprising given the lack of political action on the issue. 2020 was an outlier for obvious reasons and we witnessed unprecedented changes to all areas of public life. But for traffic emissions, it was back to business as usual in 2021. From the evidence we have, virtually every street in Scotland experienced higher levels of pollution in 2021 than the previous year.

“Air pollution from transport is responsible for thousands of premature deaths in Scotland every year, and causes serious heart and lung issues. The growing evidence base showing the links between air pollution and vulnerability to Covid-19 is only the latest reason why we have to act to protect public health.

“The Low Emission Zones being introduced will not restrict private cars until summer 2024. Meanwhile, with pollution spiking in Perth, we should be asking why only four cities in Scotland are introducing LEZs.

“The temporary improvements in air quality in 2020 arrived at an enormous cost to our communities and societies. There was no intention or concerted political action to reduce emissions, which is why the falls were not maintained when restriction eased. We need a just transition for transport, including taking control of our public transport to run comprehensive services that serve passengers not profit, and more options for safe walking and cycling, to improve the air we breathe permanently.”

“I’ve had serious asthma since I was a young child, and have been admitted to hospital over 50 times throughout my life. I have the condition in good control now through medication and lifestyle, but air pollution is something that can be really hard to avoid.

“I live in a small village in Ayrshire now, but when I lived in Glasgow I had far more attacks. Whenever I’m in the city now I’m aware of my chest being tighter, and I make sure to avoid certain streets like Hope Street in the city centre which are especially polluted. I always take my inhaler when I’m going through too. I’m incredibly aware of what affects my asthma because I have to be, but some people don’t realise what’s causing it to get worse when it’s something invisible like air pollution, and it must be very hard for people who can’t avoid these really polluted areas because of work or where they live.

“Tackling air pollution will obviously make a huge difference for asthma sufferers like me, but it’s also affecting everyone’s health so I think it needs to be prioritised more than it is currently.”

Caitlin Smyth, 24, a nurse based in Paisley said:

“I’m really concerned about the damage done to people’s health from air pollution. Things like engine idling outside hospitals and schools needs to become a thing of the past. Your car fumes might be harming someone who is vulnerable.

“That air quality is getting worse, year-on-year, is shameful. We need to make our towns and cities safer and healthier. I’d like to see a big focus on public transport, but also we need to stop cars running their engines for no reason.”

Felicity Neyme runs the Clean Air & Active Travel group at Davidson’s Mains primary school in Edinburgh. The group works to make routes to school safer and actively campaigns in the community for measures to monitor and improve air quality. She said:

“These days we all know about the dangers of smoking and even plastic in waterways but I am concerned about the lack of awareness amongst parents and grandparents about the impact of air pollution on children’s lungs.

“I regularly see cars idling at pick-up and drop-off whilst collecting the children they love, dearly ignorant of the fact that they are complicit in creating dangerous levels of pollution around school. We need publicly available data on air quality at schools, safer routes to school so parents don’t feel they have to drive and we need stricter regulation banning vehicles near school.”

Data have been ratified from January 2021 – September 2021. Data with 70% data capture and over has been included. The monitors were a combination of roadside and kerbside monitors. It should be noted that at different sites, exposure levels to the general public will be different.

The full data is available to view here: https://docs.google.com/spreadsheets/d/1pEK4OSm_IxVEfvl5rvlFe2J5BLqiH1lhqAQxeIt_I7Q/edit#gid=884639701

Free to use, print quality photos can be downloaded from the Friends of the Earth Scotland Flickr account. They include images of spokespeople, protests and featured streets
https://flic.kr/s/aHskrG52pg

Low Emission Zones in Glasgow, Edinburgh, Aberdeen and Dundee will begin in June 2022. Glasgow has a one year grace period, so the oldest cars won’t be restricted from areas in the city centres  until June 2023. In the other cities the grace period is 2 years, meaning June 2024.
https://www.lowemissionzones.scot/

The Scottish Government’s routemap for 20% car km reduction was published on 13th January. Campaigners argued that, while the target is a worthwhile commitment, all the necessary actions listed by the Scottish Government were already underway.
https://foe.scot/press-release/scottish-government-route-map-for-reducing-car-use-lack-any-new-measures/

Friends of the Earth Scotland estimate that 2500 people die early each year from air pollution in Scotland alone:
https://foe.scot/press-release/new-research-means-2500-deaths-a-year-in-scotland-are-from-air-pollution/

Children, the elderly, people with pre-existing health conditions, and sick are disproportionately affected by air pollution. (for more, see the Royal College of Physicians’ 2016 report, “Every Breath we Take: The lifelong impact of air pollution”:
https://www.rcplondon.ac.uk/projects/outputs/every-breath-we-take-lifelong-impact-air-pollution

The study, ‘COVID-19 PM2.5 A national study on long-term exposure to air pollution and COVID-19 mortality in the United States’. concludes that “an increase of 1 μg/m3 in PM2.5 is associated with an 8% increase in the COVID-19 death rate”.
https://projects.iq.harvard.edu/covid-pm

Nitrogen dioxide (NO2) is poisonous gas caused by burning of fossil fuels in car engines. Exposure to NO2 is known to be linked to increased mortality and respiratory problems. Nitrogen dioxide inflames the lining of the lung and reduces immunity to lung infections such as bronchitis.
https://www.londonair.org.uk/LondonAir/guide/WhatIsNO2.aspx

Particulate Matter are tiny, often invisible particles in the air. Particles originating from road traffic include soot from engines, small bits of metal and rubber from engine wear and braking as well as dust from road surfaces. They can penetrate the deepest part of the lungs and damage our health. The World Health Organisation advises that there is no safe level of exposure to Particulate Matter
https://www.londonair.org.uk/LondonAir/guide/WhatIsPM.aspx

Friends of the Earth Scotland is:
* Scotland’s leading environmental campaigning organisation
* An independent Scottish charity with a network of thousands of supporters and active local groups across Scotland* Part of the largest grassroots environmental network in the world, uniting over 2 million supporters, 75 national member groups, and 5,000 local activist groups.