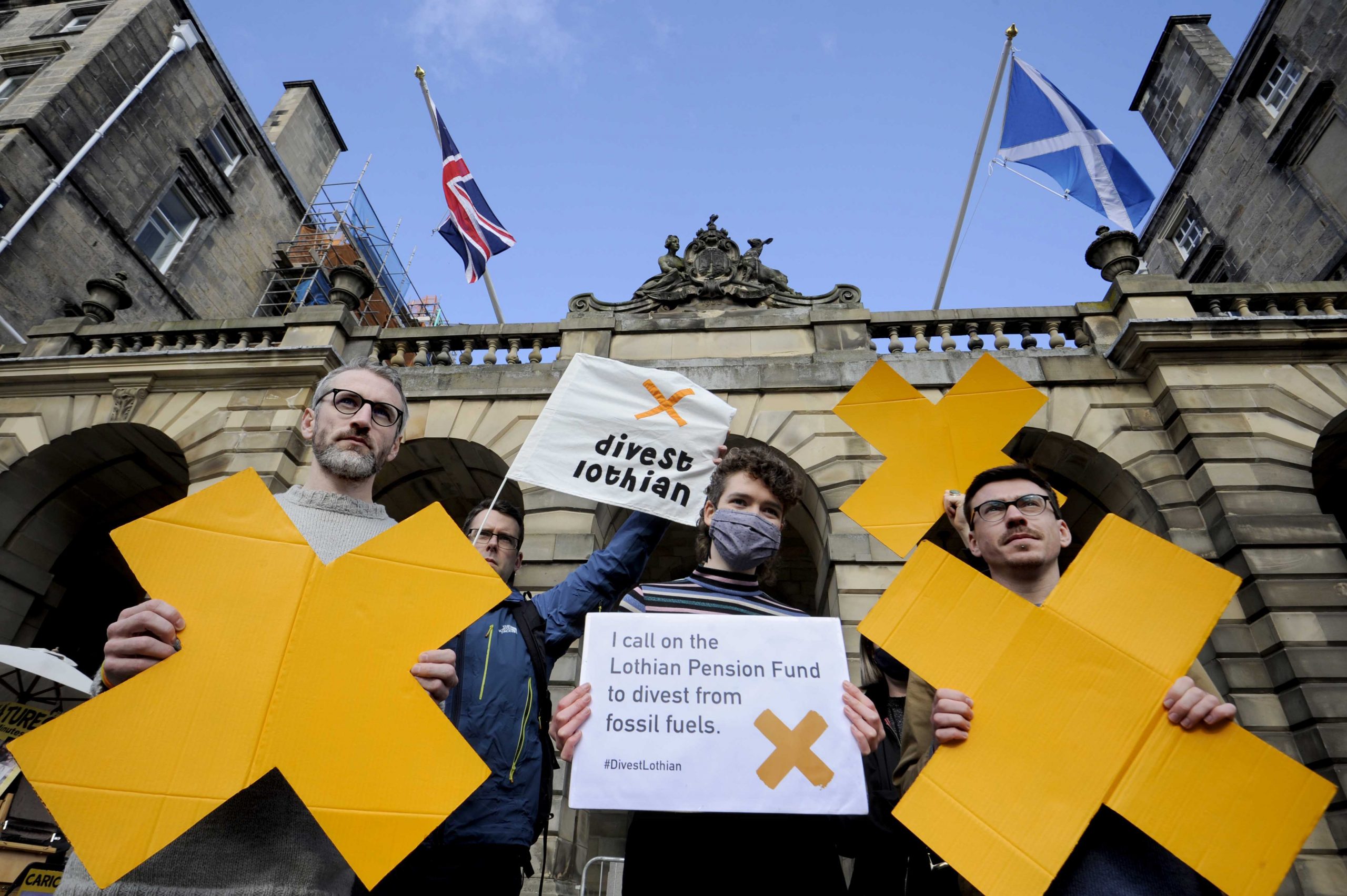 New research by Friends of the Earth Scotland has revealed the scale of Lothian Pension Fund’s investments in fossil fuels at £229 million – an increase of almost 40% from last year.

Climate activists from campaign group Divest Lothian staged a protest outside Edinburgh City Chambers on Monday to demand the pension fund, which is run by City of Edinburgh Council, removes this money from investments which are fuelling the climate crisis.

The new data shows that the Lothian Pension Fund is investing in BP, Chevron, Exxon and Shell, as well as in mining giant BHP. The research estimated that the pension fund’s fossil fuel investments have increased by £64 million since 2020.

Shell is one of the owners of the controversial Cambo oil field, situated off the coast of Shetland, which campaigners are currently fighting to stop going ahead.

The protest sought to encourage Edinburgh City and Lothian councillors to tackle the growing climate emergency by agreeing a plan to begin divesting from fossil fuels ahead of the UN climate conference, COP26, which will be held in Glasgow later this month.

The Lothian Pension Fund is the second largest local government pension scheme in Scotland and administers the pension funds of over 84,000 members from The City of Edinburgh Council and three other local authorities in the Lothians. The pension fund also manages the pensions of 90 employers, including Scottish Water, Edinburgh Napier University, Lothian Buses and Heriot-Watt University.

Iain Struthers from Divest Lothian said: “It is deeply inconsistent and morally unjustifiable that Edinburgh City Council is positioning itself to be a zero-carbon city by 2030, but with no mention of divesting its interests in fossil fuels.

“Stakeholder engagement will never change the core business model of polluting companies. Divestment is an essential step to accelerate the just transition to a sustainable future for all.”

Sally Clark, divestment campaigner at Friends of the Earth Scotland said: “The Lothian Pension Fund is directly invested in the continued search for fossil fuels through its £229 million investment in companies like BP, Shell and BHP. This is undermining the City of Edinburgh’s commitment to tackle the climate crisis.

“As Scotland prepares to host COP26 in less than a month, Scottish councils have a vital opportunity to show climate leadership by ending their pension fund investments in companies that are destroying the planet. Similar funds such as the Cardiff, Lambeth and Waltham Forest pension funds have already committed to go fossil fuel free and it is now time for the Lothian Pension Fund to join them. “

Campaigners highlighted that since The City of Edinburgh Council pledged to become a net-zero carbon city by 2030 and Midlothian, West Lothian and East Lothian Councils declared a ‘climate emergency’ in 2019, the Lothian pension fund has continued to profit from some of the coal, oil and gas companies which are most responsible for the climate crisis.

[2] Divest Lothian is the campaign to get the Lothian Pension Fund to drop investments in fossil fuel companies and other big polluters, and re-invest the money in ethical and sustainable alternatives.
https://divestlothian.wordpress.com

[5] The City of Edinburgh Council’s commitment to become a net-zero carbon city by 2030: https://www.edinburgh.gov.uk/climate-2/climate-target-net-zero-2030/1