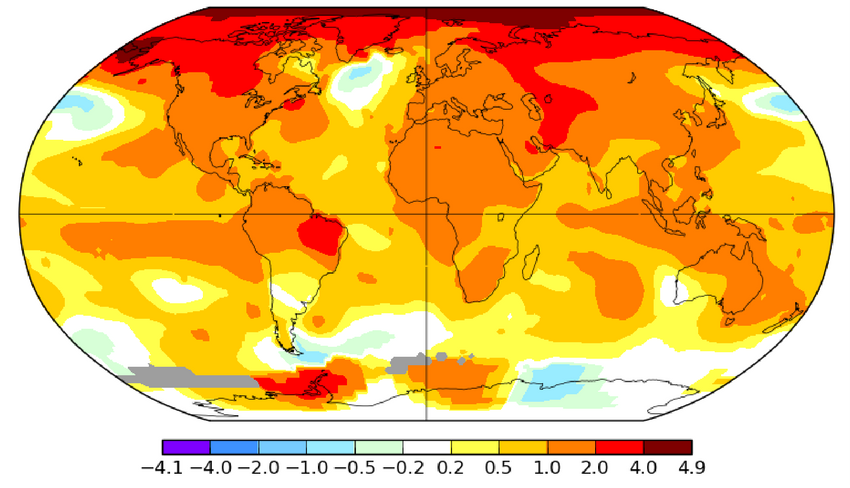 Activists inflated a huge warming earth globe outside Scottish Government headquarters at St Andrew’s House in Edinburgh today to highlight the emergency of climate change and urge greater action from the Scottish Government. The globe was created using NASA satellite maps that show average temperature rises across the planet.

“We’re here to raise the alarm on the climate emergency. 2017 has seen a succession of devastating hurricanes and cyclones, floods in South Asia, wildfires raging around the world and ice shelf collapses. With temperature records repeatedly broken the planet is sending is a very clear message that we are in a climate emergency. These record-breaking disasters come at only one degree of warming so far.

“Without greater ambition from advanced nations including Scotland, we will see devastating impacts on hundreds of millions of people around the world, put our ability to grow enough food at risk, increase political instability and wipe out many thousands of plant and animal species. To put it simply, the lives and livelihoods of millions depend upon rich nations cutting emissions as soon as possible.”

The Scottish Government has just finished consulting on new climate targets and is now aiming to introduce a Climate Change Bill to Parliament early next year. It has proposed a 90% emissions cut on 1990 levels by 2050 but this does not go far enough. Friends of the Earth Scotland wants the Scottish Government to commit to becoming a zero emissions nation by 2040, with a cut of 77% by 2030.

Dr Dixon continued,
“The First Minister has committed Scotland to ‘playing our full part in the Paris Agreement.’ But her government’s proposals so far fail to deliver what is needed to address this climate emergency. Nearly 20,000 people responded to their consultation this summer calling for increased action and stronger targets.

“The Programme for Government announcements of the phase out of fossil-fuelled cars by 2032 and the creation of a Just Transition Commission to ensure the shift to low carbon economy is fair to workers and communities were both demonstrations of climate leadership. These measures and the subsequent decision to ban fracking should embolden them to go further and set us on the path to a zero emissions Scotland. Positive action on climate change will deliver warmer homes, healthier citizens and help tackle poverty at home and abroad.”

First Minister Nicola Sturgeon is visiting the Arctic Circle Assembly in Reykjavik today where she will discuss climate action and meet with the UN climate chief. When attending the same event last year she said “it was essential that the world… makes serious efforts to keep them [temperature rises] below 1.5C.”

The environment campaigners were taking part in an International Day of Action which featured activities from over 30 grassroots groups across six continents. This weekend will see a wave of mobilisation across the world such as giant murals of resistance in Spain, anti-coal protests in Japan and Indonesia, work with affected communities by gas in rural Mozambique and an anti-fracking rally with inflatable dinosaurs in Sheffield.

Urge Nicola Sturgeon to make sure the new Climate Bill delivers on her promises. Take action now to call for a 77% cut by 2030 and a zero emissions Scotland by 2040

Free, print-quality photos are available to use from Flickr 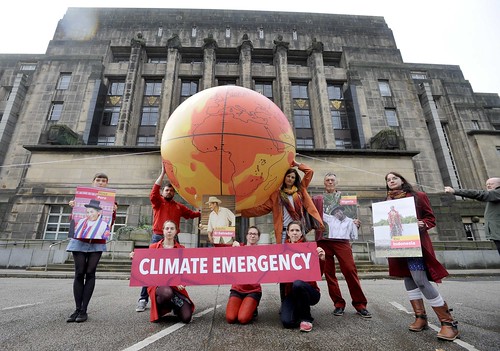 The globe in the images has been designed using the Global Surface Temperature heatmaps generated by NASA. data.giss.nasa.gov/gistemp/maps/

More information about the Days of Action can be found at foe.scot/get-involved/climate-action/ and www.foei.org/news/need-stand-one-globally-combat-climate-change

Friends of the Earth International is mobilising as part of the Reclaim Power wave of actions in October 2017: www.reclaimpower2017.net/

Scottish Government consultation on their new Climate bill received over 19,000 responses urging them to increase their ambition (Sep 2017) www.stopclimatechaos.org/news/2017/09/20/over-17000-call-scotland-lead-climate-change

First Minister Nicola Sturgeon is visiting the Arctic Circle Assembly in Reykjavik this weekend (13-14 Oct) where she will discuss climate action and meet with Iceland’s president and representatives of the UN Framework Convention on Climate Change.
https://news.gov.scot/news/all-eyes-north

Friends of the Earth Scotland is urging the Government to
• Set a target of zero greenhouse gas emissions by 2040, and a reduction of 77% by 2030
• Ensure that future finance budgets are consistent with our climate targets
• Commit to actions that cut emissions and deliver a cleaner, healthier, more prosperous Scotland by:
– Making all homes efficient and warm: Ensure that all homes have at least Energy Performance Rating ‘C’ by 2025.
– Greener farming: Set a nitrogen budget for Scotland by 2020.