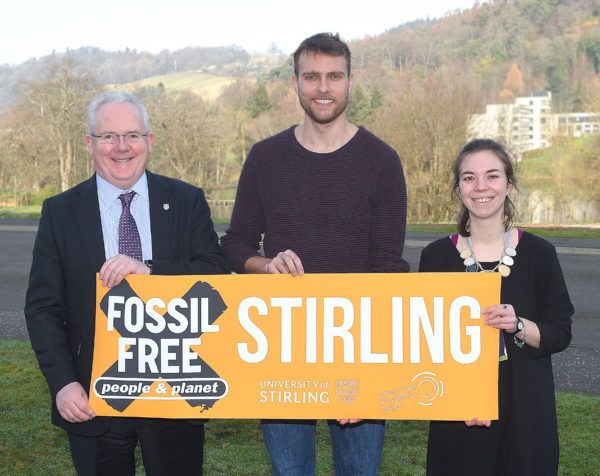 The University of Stirling has become the 9th organisation in Scotland to commit to ending investment in fossil fuel companies.

The University said the commitment would “help the University ensure it continues to embed sustainability at the core of its business practices.”

The announcement is a victory for Stirling Students Union who have been campaigning for the University of Stirling to disclose its financial investments and remove any fossil fuel investments from its portfolio.

In a statement the Students Union said the move sees the university joining a group of 71 others in the UK, depriving fossil fuel companies of £11 billion of potential investment. (1)

Professor Gerry McCormac, Principal and Vice-Chancellor, said: “We’ve always taken our commitment to environmental sustainability seriously – both on our campus and around the world.”

Astrid Smallenbroek, Students’ Union President, said: “With the Students’ Union’s continuing focus and commitment to sustainability, we are incredibly pleased to see the University taking action as a direct result of student feedback.”

Scientists agree that the dangerous temperature rises we are seeing in the global climate is primarily due to the use of fossil fuels. Fossil fuel divestment is increasingly seen as a powerful way to build support for the move to a fossil free, sustainable economy.

Ric Lander, Divestment Campaigner for Friends of the Earth said:
“Students and staff at Stirling should be proud of their efforts encouraging the University to take this important step to protect our planet. Divesting from fossil fuels is a practical way for public-spirited organisations to take action on climate change.

“This announcement sends a statement to the world, that we do not want oil, gas and coal companies and the pollution they create in our communities.”

A report in the Financial Times this week shows that fossil fuel companies are spending a mere 1% of their capital investments in green alternatives. (2)

Stirling University joins other high-profile divestment commitments including City of New York, the University of Edinburgh and London local councils. (3)

Friends of the Earth Scotland can also confirm that 34 of Scotland’s MP’s have pledged support for divestment from fossil fuels of the Westminster Pension Fund, this means a majority of Scotland’s MPs want action on these investments.

The Falkirk Pension Fund, which serves the Stirling area, has committed to investing in line with global agreements on climate change, but retains significant investments in fossil fuels. (4) A local campaign, ‘Divest Falkirk’, is seeking to change this.

“We are pleased to hear Stirling University has committed to divesting from fossil fuels and would like to congratulate those who worked hard for divestment.

“We are urging other institutions to show leadership and follow suit by divesting the Westminster Pension Fund, the Scottish Government Pension Fund and the Falkirk Pension Fund.”