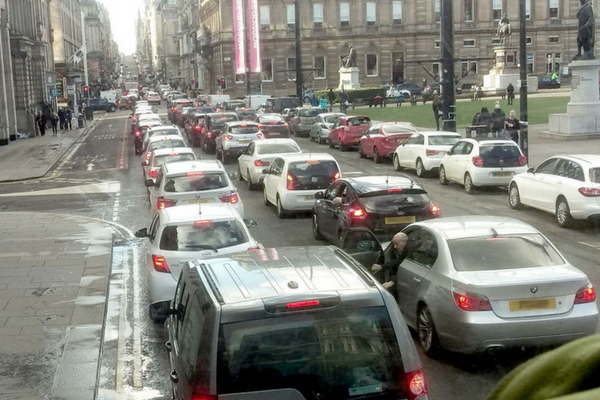 Statistics published by Transport Scotland this morning reveal that our roads continue to be dominated by cars, that bus passenger numbers continue to fall, and that rates of people cycling to walk are still too low.

“The statistics reveal Scotland’s transport system continues to favour the private car, to the neglect of cleaner, fairer modes of transport like buses, walking, and cycling. The result is that we have an air pollution health crisis, with all of our major city centres tarnished by toxic air, and with vulnerable people including children, the elderly and the ill disproportionately affected.

On electric vehicles
“This research reveals that a key barrier to the uptake of electric vehicles is that people are worried their electric car might run out of power mid-journey. By investing in charging points across Scotland, starting with the A9, the Scottish Government will help remove this ‘range anxiety’. The Scottish Government should embed its commitment to phasing out diesel and petrol vehicles by 2032 in the upcoming Climate Bill.

On buses
“Buses have the potential to be a solution to air pollution because one full double decker can take 50 cars off the road. These statistics confirm that our bus sector is in crisis, with passenger numbers falling significantly in the last decade. The Scottish Government should re-regulate the bus sector through its Transport Act so that councils can better ensure that bus services operate in the public interest.

“Low Emission Zones, which should initially require cleaner buses, vans, and lorries in our cities, should make buses a more attractive experience for passengers. Bus operators should make use of the Government’s Green Bus Fund to help clean up their vehicles. Lothian Buses in Edinburgh boasts Scotland’s cleanest fleet and continues to see rising passenger numbers and is testament to the fact that the rest of Scotland’s bus operators can and should do much better.

On walking and cycling
“More than half of all journeys are under 5 km in length, and many of these could realistically be taken on foot or by bike, yet just under 3 percent of all trips to work are made by bike.
“The Scottish Government’s recent commitments to building more cycle paths, and introducing Low Emission Zones in our largest cities could be the start of really making our transport be cleaner and greener. We hope to see these positive changes reflected in the statistics in years to come.

Climate Change
“Transport is the largest sector in terms of Scotland’s climate emissions and with the dominance of fossil fuelled cars in these figures it is not difficult to see why. The legacy from decades of decisions to prioritise cars above all modes is congested streets that are damaging to both our lungs and the climate.”

The newly released Transport Scotland Statistics are available to view at https://www.transport.gov.scot/publication/26-september-2017-transport-and-travel-in-scotland-2016/

Earlier this month, we welcomed the Programme for Government as the Greenest Ever: https://foe.scot/press-release/prog-govt-2017-reaction/