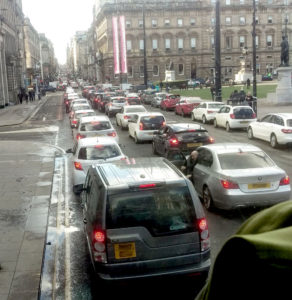 Campaigners welcomed news that MSPs today (19/6/19) voted in favour of giving powers to councils to implement a Workplace Parking Levy. The Scottish Parliament’s Rural Economy and Connectivity (REC) Committee passed an amendment during Stage 2 of the Transport Bill.

The powers would allow councils to introduce a Workplace Parking Levy. A small charge would be paid by employers on each parking space and this revenue would be reinvested in sustainable transport.

A survey by the REC Committee found a majority of people supported the workplace parking levy proposals, with the most popular reasons for supporting the measure being ‘it will help reduce local air pollution’ and ‘it will encourage car commuters to switch to walking, cycling, bus or rail.’

A Workplace Parking Levy was introduced in Nottingham and applies to workplaces with more than 11 parking spaces. The charge is paid by employers, who decide whether to pass it on to staff who use the parking spaces. The revenue generated has been reinvested in public transport improvements for the city, such as contributing to a tram extension.

“Road transport was recently revealed to be Scotland’s single biggest source of climate emissions, so it is very welcome that the Committee agree that they should not continue to reinforce our current transport system that gives undue priority to the car, particularly in our towns and cities. The Scottish Government also finally admitted they will miss their 2020 cycling target by a shocking margin, more politicians must now join the dots and put in the energy and resources required into changing our transport habits.

“Our air pollution problems, climate emissions and even our sedentary lifestyles are in part due to the stranglehold the car has on how people in Scotland move around. Proportionate measures such as a Workplace Parking Levy can help Councils develop locally appropriate plans for tackling the enormous climate pollution coming from our travel choices.

“The Workplace Parking Levy has a record of delivering significant improvements to travel habits, bringing much needed investment to transport infrastructure, and creating healthier places to live and work. It is an optional power being offered to councils. It is clearly not right for every area, but city councils in Scotland dealing with congestion, insufficient resources for public transport, and illegal levels of air pollution, should now investigate how they might use these powers.”

“People should have the opportunity and freedom to travel by greener methods, to feel safe walking and cycling, and to choose public transport that is reliable and affordable. “

1. SNP and Green Party members of the Scottish Parliament’s Rural Economy and Connectivity Committee passed amendment 7, which will give councils the power to implement the workplace parking levy.

2. Friends of the Earth Scotland and a number of other organisations co-signed a letter in support of the discretionary powers for a workplace parking levy. The text of the letter is available at https://foe.scot/resource/letter-support-workplace-parking-levy/

3. In 2017, road transport was the largest source of emissions in Scotland. Road transport emissions have increased by 11.1 per cent between 1990 and 2017.

Transport (excluding International Aviation and Shipping) was responsible for 32.1% of Scottish Greenhouse Gas Emissions in 2017. https://www.gov.scot/publications/scottish-greenhouse-gas-emissions-2017/pages/3/

5. The Centre for Cities (2018). Why a Workplace Parking Levy could help solve cities’ transport and congestion problems. http://www.centreforcities.org/blog/workplace-parking-levy-answer-cities-transport-congestion-problems/

6. 28% of people in Scotland don’t have access to a car and we know that bus users are disproportionately lower paid workers or those seeking employment. Scottish Gov transport statistics https://www.transport.gov.scot/publication/transport-and-travel-in-scotland-2017/sct08183658301-31/

7. It was revealed in January 2019 that there were 7 sites where air pollution was at illegally high levels in Scotland in 2018. https://foe.scot/scotlands-most-polluted-streets-in-2018/

8. Free to use photos of air pollution protests and Scotland’s most polluted streets are available at https://flic.kr/s/aHskrG52pg

9. A survey by the REC Committee, which received 4598 responses, found that 58.5% of respondents supported the workplace parking levy. https://www.parliament.scot/S5_Rural/RECC_WPL_survey_-_Key_Themes_updated.pdf

10. Friends of the Earth Scotland is
* Scotland’s leading environmental campaigning organisation
* An independent Scottish charity with a network of thousands of supporters and active local groups across Scotland
* Part of the largest grassroots environmental network in the world, uniting over 2 million supporters, 75 national member groups, and some 5,000 local activist groups.