Scotland’s Most Polluted Streets in 2021

Scotland breached legal air quality limits in 2021 after a historic low in 2020 due to the pandemic. Hope Street in Glasgow recorded an annual average above the legal limit for diesel pollution, while many streets across Scotland saw pollution spike back up despite Covid-19 restrictions like working from home continuing through the year and the country being in lockdown for the first few months.

From the evidence we have, virtually every street in Scotland experienced higher levels of pollution in 2021 than the previous year.

We analysed official air pollution data for 2021, looking at two toxic pollutants which are primarily produced by transport. Legal air quality standards came into force in 2010, yet have been broken every single year since except 2020.

As traffic levels increased through 2021, air pollution rose correspondingly. While Hope Street in Glasgow once again breached legal air quality limits for nitrogen dioxide, other streets such as Salamander Street in Edinburgh and Atholl Street in Perth experienced increases in particulate pollution.

Nitrogen dioxide is a poisonous gas caused by burning fossil fuels in car engines. Exposure to nitrogen dioxide is linked to health problems because breathing it in inflames the lining of our lungs and reduces immunity to lung infections such as bronchitis.

These were the worst streets in Scotland for nitrogen dioxide last year.

Particulate matter are tiny, often invisible particles in the air. Particles originating from road traffic include soot from engines, small bits of metal and rubber from engine wear and braking as well as dust from road surfaces. They can penetrate the deepest part of the lungs and damage our health, so the World Health Organisation advises that there is no safe level of exposure to particulate matter.

These were the worst streets in Scotland for this kind of pollution last year. 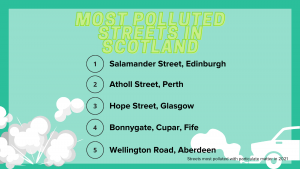 Governments and councils haven’t done enough to reduce car traffic. The temporary improvements in air quality in 2020 arrived at an enormous cost to our communities and societies. There was no intention or concerted political action to reduce emissions, which is why the falls were not maintained when restriction eased.

Air pollution from transport is responsible for thousands of premature deaths in Scotland every year, and causes serious heart and lung issues. The growing evidence base showing the links between air pollution and vulnerability to Covid-19 is only the latest reason why we have to act to protect public health, so 2021 should have been a year of definitive action to tackle it. 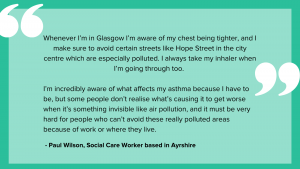 We need a just transition for transport, including taking control of our public transport to run comprehensive services that serve passengers not profit, and more options for safe walking and cycling, to improve the air we breathe permanently.

In practice, this means things like using the review of the planning system in Scotland which is currently taking place to stop out-of-town developments and drive-thru coffee shops that are entirely car dependent, make it easier for councils to introduce safe walking and cycling measures, and to use public space better.