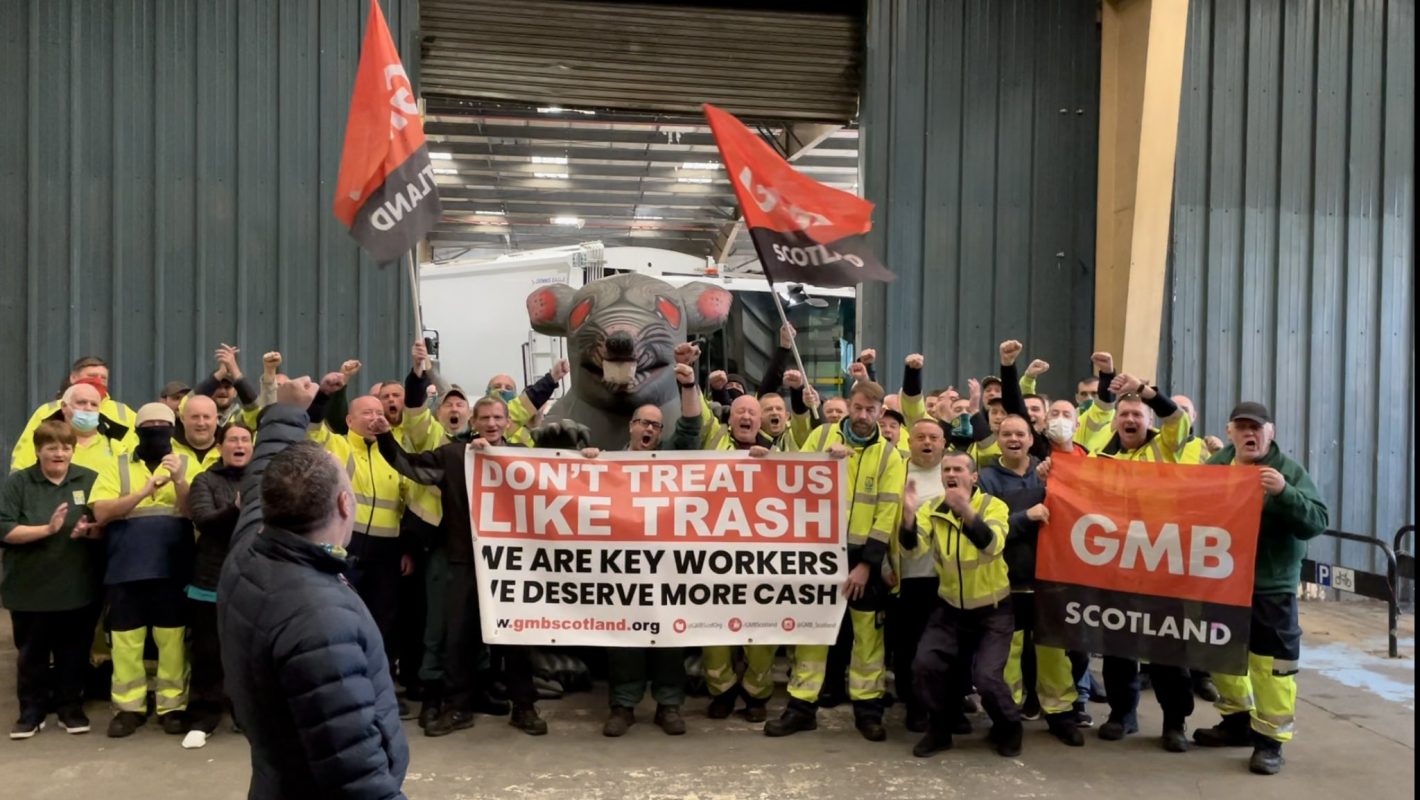 Scotrail conductors and ticket examiners have voted to strike for the duration of COP26 in a battle for pay justice with other grades of workers across the service. This follows months of strike action on Sundays with no satisfactory offer provided to the workers by the operator Abellio.

This vote came a day after GMB members in Glasgow’s refuse centres also voted to strike during COP, unless they receive an offer that matches the “key worker” status many politicians assigned them as they continued to work throughout the pandemic.

The workers are demanding proper rises or equality of terms, but their concerns are not limited to pay. With proposals to cut the Scotrail service by reducing the numbers of trains on lines and removing platform facilities that are vital to disabled and vulnerable travellers, workers are taking action to resist these damaging and unnecessary cuts.

Likewise, for Glasgow’s cleansing workers, cuts have led to a city that isn’t dealing with its waste properly – including recycling. In addition to a fair pay rise, the cleansing workers want proper funding to make their work safe and clean.

Cuts to these vital services are also bad news for the fight against climate change. Transport is our biggest source of climate-changing emissions, with private car use at the heart of the problem.

We urgently need more and better public transport provision to help tackle the climate crisis. We also urgently need to move to a circular economy, reducing the waste we create by instead increasing reuse, recycling and repair.

The workers who have voted to strike are the people who will actually make both of those changes happen and they are saying that they are undervalued and more investment is needed.

We should all support the workers taking industrial action, and not just in the interest of cutting pollution from transport and waste. In their fight for fair pay and proper investment in essential services, these workers are demonstrating the power that we must build everywhere to tackle the climate crisis at its roots.

We know what the solutions to the climate crisis are. Where the wealthiest governments and businesses are not making changes at the scale or pace needed, that is a political choice. And where emissions have been cut in the UK, it’s often been through the offshoring of industry and manufacturing without the creation of green alternatives for workers and communities affected.

Meaningful reductions in our emissions won’t happen without a rebalancing of power away from polluting and extractive companies, into the hands of ordinary people in the UK and across the world. Only then will governments start to make the right decisions. Strikes are one of the most effective demonstrations of the power that lies in the hands of workers, and one of the most effective ways of bringing about necessary social change.

Without workers, there is no rail network, no bus travel, the bins don’t get picked up. The greater the disruption caused by the strike, the more pressure there is to meet the demands. So going on strike during COP26, when the eyes of the world are on Scotland, is the sensible, strategic choice for these workers.

From Madrid to Glasgow

Industrial action during COPs is not unique to Scotland. When Madrid hosted the talks in 2019, the Municipal Transport Company (EMT) saw disruption when bus and metro workers went on strike for better pay, improved services and a firm commitment to protect the service from privatisation – the consequences of which are well known for those who use Glasgow’s own buses.

International travellers to the Madrid summit also got caught up in a protracted struggle against French President Emmanuel Macron’s reforms when air traffic controllers went on strike for several weeks at the close of 2019.

If you are worried about access to the talks in Glasgow for those on the frontlines of climate chaos, or angry that there will be people seeking to undermine a successful outcome at the end of the conference – then you are right, but not because of workers striking within Glasgow.

Instead, it is the Covid-19 vaccine hoarding by wealthy nations like the UK, racist Home Office policies restricting visas and the cost of travel and accommodation that will actually prevent many of those most impacted by the climate crisis in the global South being heard during these crucial climate talks. And within the halls, you can guarantee there will be those disrupting progress. They will be the leaders and representatives of intransient governments and vested private interests manoeuvring inside to obstruct the solutions we need to avert climate breakdown.

COP26 will be a huge opportunity for people concerned about the climate crisis to demonstrate that on the streets of Glasgow, elsewhere in the UK and across the world. When the conference ends, we need to see a ramping up of action and that must mean improved offers to these striking workers. There is one sure way we can all help to make this happen far quicker – show up in solidarity with these workers and add even more power to their cause – “the longer the picket line, the shorter the strike.”