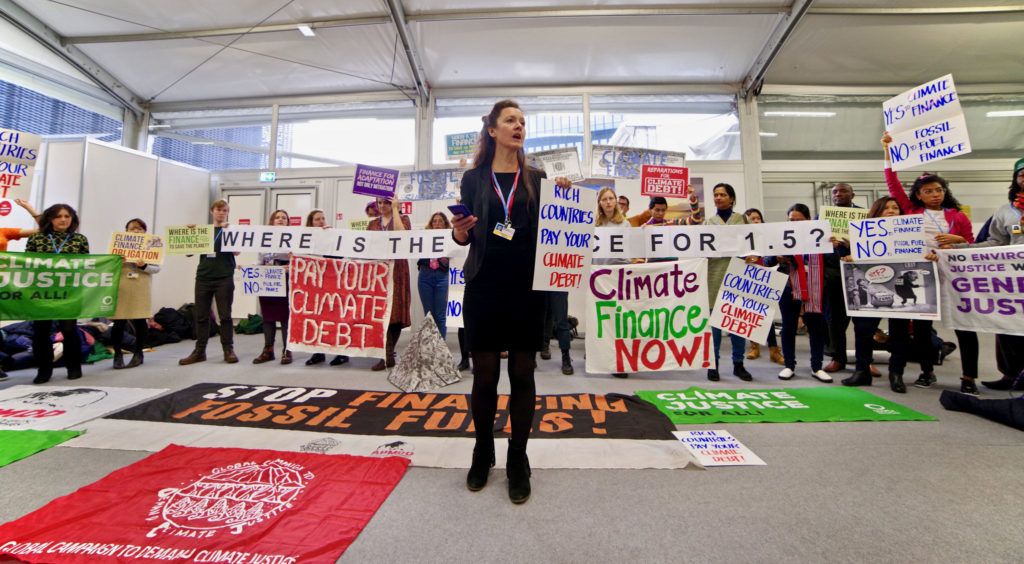 If we are to tackle climate change, we must change the system

Home > If we are to tackle climate change, we must change the system
18th December 2018 By Mary Church

Katowice might go down in history as the longest UN climate talks ever – opening a day early and finishing a whole day late. But it will also surely go down in history – if there is anyone left alive to read the history books – as the conference that failed, despite the extra time, to act on the basis of science and respond appropriately.

Because an appropriate response to the IPCC’s terrifying warning of only two months ago that we have merely a decade to avoid truly catastrophic warming would be to require an absolutely massive increase in efforts to cut greenhouse gas emissions. An effort that would look like a minimum average 12% reductions per year across the EU, and comparable cuts in developed countries around the world – along with the provision of hundreds of billions in climate finance to the global south.

To put this in context – Scotland is amongst a handful of countries with the strongest climate change targets in the industrialised world, and yet our legislation requires only 3% per year; something we have struggled to achieve more than once. Meanwhile our well-intentioned Climate Justice Fund amounts to barely a drop in the ocean of the finance needed.

Instead, what we saw at the talks known as COP24, was an effort led by the US to fundamentally deny the science of climate change, and to reinterpret the Paris Agreement in determining how it should be implemented. The US is the only country in the world that has not endorsed the findings of the IPCC’s Special Report on 1.5, and, backed by an unholy trinity of big oil and gas producing nations – Russia, Saudi Arabia and Kuwait – ensured that the Paris Agreement processes designed to ramp up climate action would not integrate the latest science.

It also led efforts to erode the principle of equity, or common but differentiated responsibility, core to the Paris Agreement, which recognises the historical responsibility and greater capacity of nations in the rich, industrialised west to shoulder the burden of action to tackle the climate crisis.

With Trump at the helm it’s easy to point to the US as the villain of the piece. But what of the EU as a negotiating bloc and other so-called progressive forces? In what was part a misguided attempt to create space for the US to come back into the Paris Agreement (during the 4 years it takes to actually leave), the EU and other developed countries either supported or hid behind the US in watering down the Paris Rulebook and any mandate for increased action. In part, the EU’s behaviour in these talks is due to its member states’ refusal to confront the need for deep systemic changes world wide as the only answer to the climate crisis.

The story of rising emissions and an emerging climate crisis over the last 250 years is also the story of a struggle for improved living and working conditions on the one hand, and on the other, of powerful interests – whether nation states or corporations – growing rich at the expense of others.

The climate crisis amongst many crises

The failure of governments to address the root causes of the multiple crises afflicting both global north and south – poverty, lack of access to energy, polluted air and water, inadequate transport, unemployment or precarious work, increasing mental health problems and isolation – is driving voters into the arms of opportunistic, self-serving extremists who offer simple, if violent, answers. Trump, Erdogan, Duterte, many of the politicians who argued for Brexit, and now Bolsonaro. Because their lies are as easy to swallow as the mantras of centrists left and right who are unable to see beyond business as usual, unable to break free from the corporate fossil fuel interests that dominate in the corridors of power.

We are at perhaps the most important crossroads in the history of humanity: to respond effectively to the climate crisis, or not, and face a slow, painful extinction. Almost all governments, including our own, at devolved and UK level, talk the talk of acknowledging the crisis and responding accordingly. But responses to date have, for the most part, simply shifted our emissions to China and other growing emitters who produce much of what we continue to consume. Global emissions continue to rise and show little sign of peaking.

How can we respond to these problems?

There is no more time to waste tinkering at the edges of a global economic system that has both caused and failed to address the climate crisis. It is time for deep, systemic changes to the way we produce food and what we eat, to the way we produce and consume energy, to the way we travel, to how our clothes are produced, and how quickly we discard them, to our work life balance, to what is recognised as work and how it is rewarded; ultimately to what is recognised as ‘success’ and what people aspire to, reconnecting with what makes us human.

To get to that place we need an honest and open dialogue across society about how to create a system that puts people before profits. We need a just transition to a fossil free economy, where public goods are democratically owned. These are big asks! But if we act together we can make them happen. We have to make them happen – our very survival and the survival of future generations depends on it.

Mary Church is Head of Campaigns for Friends of the Earth Scotland. She spent the last two weeks at the UN climate conference in Katowice, Poland. A version of this article appeared in The Scotsman on Tuesday 18 December