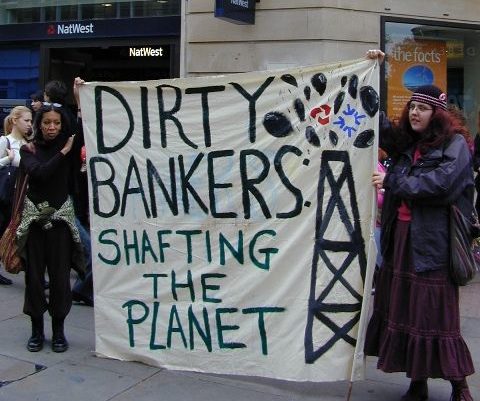 Scotland is about to get a brand new public bank – but what kind of bank will it turn out to be?

We’re in the thick of a battle over the soul of the Scottish National Investment Bank – a battle which Friends of the Earth Scotland supporters have been firmly involved in, and will define the future of this valuable new institution.

This is a battle between two very different institutions. In one corner is a people’s Bank – a public spirited, accountable financier that funds green jobs and socially just projects for the common good. In the other corner is a business-as-usual Bank, run by disreputable bankers to generate private profit for their friends with little interest in ethical standards.

In the last few months the people’s Bank has scored some cracking punches.

The Scottish Government had stated that tackling climate change would be a “primary mission” and “central part” of the Bank’s activities. The Government failed to reflect this when they put forward their proposed Bill but activists rose to that challenge with over 500 people asking Economy Committee MSPs to implement changes – we heard anecdotally that MSPs have very rarely seen so much interest in a Committee vote before. Accordingly the vote was won and the proposed Bill now places a just transition to a zero carbon economy as a key objective of the Scottish National Investment Bank.

Specifically the revised Bill now states the Bank has the ancillary objective to “promote environmental wellbeing, and in particular, support the transitions required to meet the net-zero emissions target… and circular economy initiatives” and “promoting the just transition principles”.

Punches were also landed over the Bank’s focus on promoting economic growth. Whilst this is still in the Bill, the Bank must now also deliver and report on “economic, social and environmental” outcomes, shifting the focus away from purely financial measures of progress. The Bill has also been amended by MSPs to promote equality and non-discrimination and enhance accountability to the Scottish Parliament.

But business as usual has been fighting back.

Instead of taking leadership from the public sector, the Scottish Government has appointed a private equity magnate, Willie Watt, to Chair the Bank’s new board. His appointment comes after the 2017 hiring of former RBS manager Benny Higgins as ‘Strategic Advisor’.

Watt and Higgins will oversee a Bank which, as things stand, is not restricted from lending to companies avoiding tax or not paying the living wage, and is not legally required to implement an ethical investment policy. The Economy Committee MSPs had the chance to make these changes – but rejected them. These blows were a clear win for business-as-usual.

All MSPs will have one final chance to consider the Scottish National Investment Bank early in the New Year, likely in January. When they do they must take control of this Public Bank back from the bankers and make it work for the common good.

This must include enshrining an ethical investment framework into law which ensures the Bank cannot invest in companies which undermine its climate objectives. This change would ensure the Bank doesn’t invest in climate-wrecking and unsustainable companies, such as fossil fuel extraction, illegal logging, plastic production and other projects that will push up climate emissions.

If this battle is to be won, we’ll need as many people as possible to be there in the corner cheering for a positive, socially useful Bank. Keep an eye out for opportunities to get involved and keep talking to politicians about the Bank you want to see.

When the fight is over we urgently need this Bank to get moving on its new climate objectives. Annual investment in clean energy is now at its lowest since 2008 with UK Government policies working to reverse the growth of the renewables industry. The Bank could tackle fuel poverty, support retraining of workers, create new renewables supply chains, decarbonise our heating and finance zero carbon transport.

The rest of the world is already pushing ahead. The European Investment Bank, the world’s largest public investor, is phasing out investments in fossil fuels and in 2018, the Irish Parliament approved a Bill to make the Irish Sovereign Wealth fund divest from fossil fuels.

Ask your MSPs to Divest Scotland from fossil fuels by ending their Pension Fund investments in the companies driving climate breakdown. Take action below:

Email my MSPs
This site uses cookies to store information on your computer. To find out how we use them please view our Privacy Policy.Accept AllNo Thanks
Manage consent