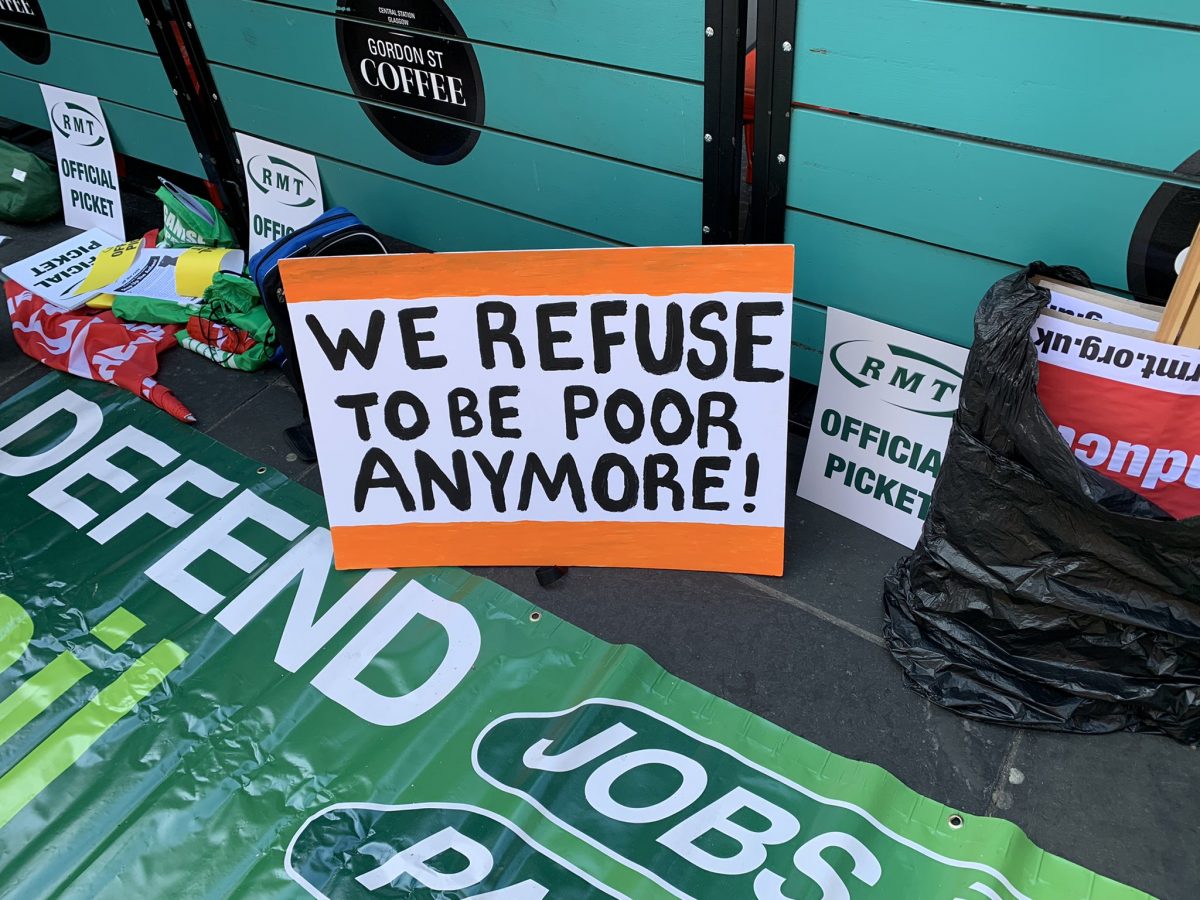 Why you should care about the Hot Strike Summer

While the contest to be Prime Minister focuses on tax cuts for the rich and stoking the ‘culture wars’, we’re in the midst of what’s being dubbed Hot Strike Summer. Increasing numbers of people are coming together in their workplaces to take strike action, refuse overtime or walk out during their shifts.

In August alone, workers in BT Openreach, Royal Mail and ScotRail will take strike action. Workers at Grangemouth, Mossmorran and different Amazon sites have walked out of their workplace. The largest ballot in Scotland for a decade, of council workers including waste and education, just returned a resounding yes to strike action too.

Cost of living crisis for workers

Bills are rising yet wages aren’t keeping up. The rocketing price of gas is driving up energy bills with the so-called ‘Price Cap’ failing to really cap prices.

For years, people’s wages in the UK haven’t kept up with inflation and the sharp increase in energy bills means that hundreds of thousands of people will be completely unable to pay, alongside a growing number who will refuse to.

During COP26 in Glasgow last year, we wrote about the importance of supporting waste and transport workers who were taking strike action. But it isn’t only in sectors that are essential to reducing emissions that the climate movement should support workers.

It’s the same economic system, and many of the same big corporate players, that by prioritising profit over people and planet is driving both climate destruction and the cost of living crisis and erosion of workers’ rights. The struggle for decent pay and conditions is an essential part of creating the better world that we know is possible.

The phrase Hot Strike Summer isn’t related to the weather, but it’d be appropriate if it were. We are seeing a summer of heatwaves that will affect food supplies and drive wildfires, and drought has just been declared across parts of England.

We will then go into a winter in which millions of people won’t be able to afford to warm their homes from the cold.

These crises are linked and they are years in the making. It’s no coincidence that energy price rises are announced in the same weeks as fossil fuel companies post their own record profits and shareholder payouts. Six oil companies made $130billion in profit in just 6 months.

As poverty and climate breakdown impact upon millions of people, bonuses are dished out to those at the top. The solutions are clear: we need a rapid and just transition away from costly and volatile fossil fuels to a renewable energy economy, with decent green jobs and affordable energy for all.

Yet instead of tackling the big energy companies and prioritising the shift to clean energy, the UK Government has acted quickly to sign off new rules to allow companies to hire agency staff as cover for workers on strike. This can be dangerous as it often leads to significant sections of the workforce being temporarily replaced, without the local and site specific knowledge.

Today we changed the law to allow businesses impacted by strike action to hire skilled, temporary workers to mitigate disruption.

This was a criminal offence. Now it’s an option for business.

We will not let trade unions grind our economy to a halt.

The objective is clearly to limit the impact of strikes, to limit the ability of workers to negotiate decent pay and conditions. Where is the same level of urgency to stop these crises from happening, to protect people’s living standards or to prevent climate breakdown?

Collective action can make a difference

People in the UK are looking to October and wondering how they will manage when the latest gas price rises kick in. These workers are taking a stand now. Their collective action is demonstrating to those responsible that real power lies in peoples hands, in their workplaces and their communities, just as during the height of the pandemic where we saw mutual aid groups across communities and we heralded the genuine key workers in our economy.

Workers in their trade unions have won rights that benefit us all, from sick pay to the 8 hour working day and far more. They are often a barricade holding back the spread of bad practice across workplaces and the unchallenged dominance of companies.

The fight against injustice is everyone’s fight, and @RMT_Scotland are leading the way demonstrating the collective power we must build everywhere to tackle the cost of living crisis.

🗓10am Sat 20/8
📍Outside Waverley station pic.twitter.com/meTmG4i9cS

In their fight for fair pay and proper investment in essential services, these workers are demonstrating the solidarity and collective power that we must build everywhere to tackle social and climate crises at their roots.

Find a picket line near you
Join a trade union
This site uses cookies to store information on your computer. To find out how we use them please view our Privacy Policy.Accept AllNo Thanks
Manage consent