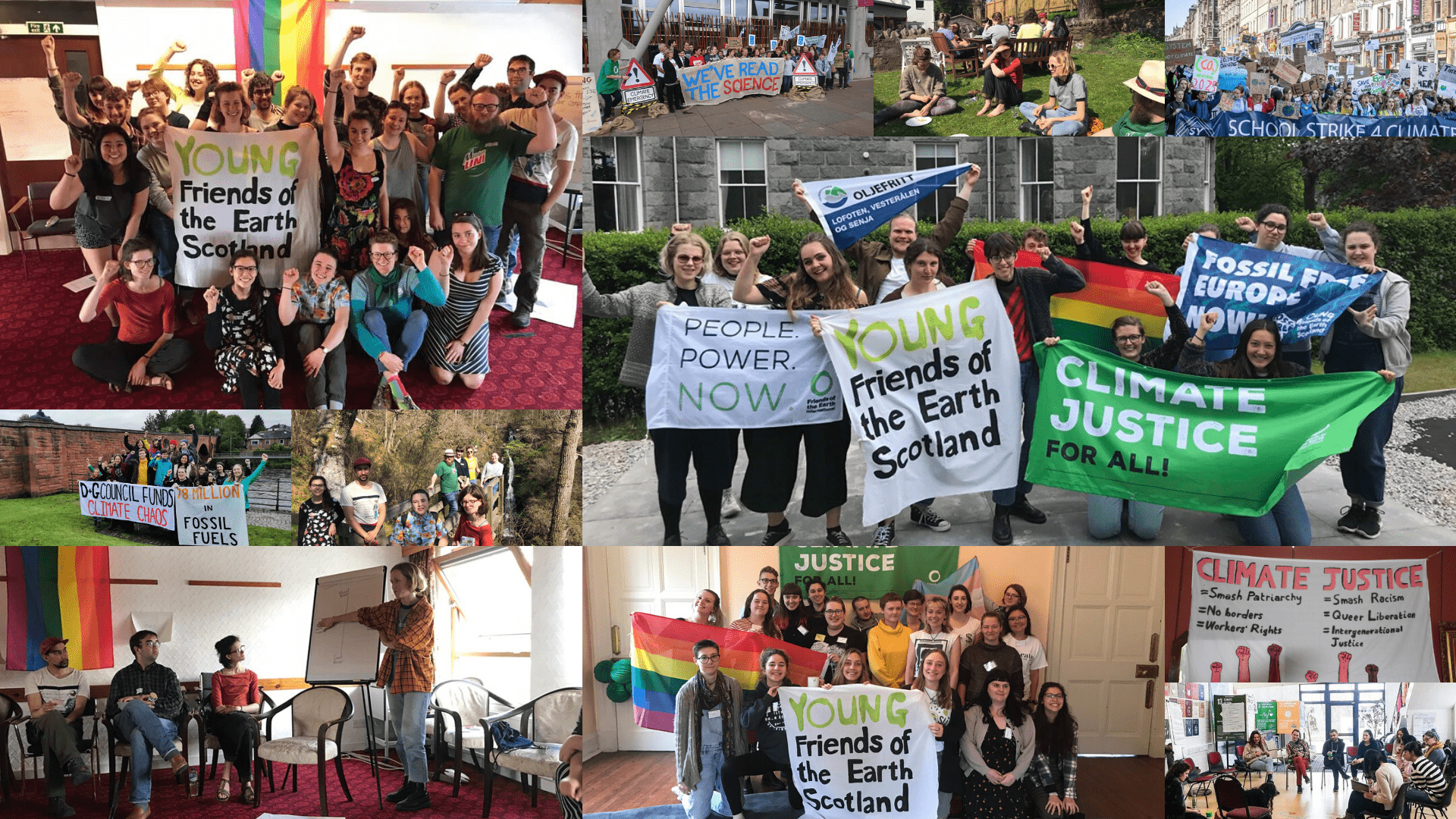 Young people and climate action in 2019

The other day someone said to me “the problem is that young people need to get off their phones and care more”. I had to laugh. Before I started working for FoES I was part of the YFoES network, so I had some idea of the things young people across Scotland are working on. This year has shown me better than ever the incredibly broad range of social and environmental causes young people are engaged in, the levels of passion and creativity, and their unstoppable drive for a better future.

Yeah, we might be on our phones, but we’re probably making climate memes, emailing our reps, or gathering support for the next strike. Young people definitely care.

At the start of 2019 I was flung straight into lobbying around the Climate Bill, and this continued throughout the year. YFoES had given evidence in the Scottish Parliament at the end of the previous year. In January we produced resources giving young people tips on lobbying their representatives before the first debate. We joined other groups outside parliament for Stage 2 in April where we spoke highlighting climate justice and Scotland’s historic responsibility. We were there again for the final debate in September, helping to pile on the pressure that saw last minute improvements to the bill.

Although we are disappointed in the lack of ambition from the Scottish Government, we haven’t given up. Young people were there every step of the way for the Climate Bill, and we will continue to hold our decision makers to account.

In February myself and Daisy from YFoES travelled to Ireland for the Young Friends of the Europe AGM, where we met with other young activists from across the continent. We undertook training on intersectional movement building and working with affected communities, and brought this knowledge back to the network in Scotland through workshops and resources.

April featured our skill share in Pitlochry. Around 30 young activists from across Scotland came together for workshops on power and privilege, climate justice, creative writing, crafting, creative activism and more. We were also joined by feminist direction group Sisters Uncut for a workshop on non-violent direct action. Click here to read the zine we collectively created based on the weekend!

In May we were joined by YFoE Norway (Natur og Ungdom) for a three day training on the theme of just transition in Aberdeen. We had sessions led by trade union reps, oil industry experts, activists and many others. We spoke about climate justice, workers rights, nationalism, the economy, the future of work and most of all how to protect workers and communities while we move our oily countries away from fossil fuels!

As a result of this training we have strengthened our relationship with young trade union groups, created plans for a podcast (keep a lookout in the new year!), and embedded the call for a just transition into our organising and campaigning across the network. You can read more on YFoE Europe’s blog here.

As the year went on school strikes gained prominence. YFoES provided wellbeing stalls, rallied support, acted as march stewards and of course took to the streets in support of the incredible Scottish Youth Climate Strikes. Marching with 20,000 others past the Scottish Parliament on the 20th of September – alongside 7 million across the world – remains my most inspiring and hopeful moment of the year.

October rolled round and it was time for our AGM. We gathered at Laurieston Hall in Dumfries and Galloway for a weekend of workshops on creative activism, mainstreams and margins, challenging eco-fascism, zine making, bushcraft and more, as well as the election of our new steering group. We reflected on our achievements of the past 12 months, and discussed our focuses for the next year. Needless to say the announcement of UN Climate Conference in Glasgow featured heavily!

Inspired by the YFoE Europe Toolkit for Intersectional Movement building, we’ve spent a lot of time this year thinking about intersectionality. We’ve been working on access, inclusion and accountability throughout our network and events. As part of this we created a new Safer Spaces policy and developed several workshops on power and privilege.

In between all of this, we’ve had socials, drink & thinks, and craft nights across the country. We’ve also delivered workshops, given talks, spoken on podcasts and panels, and lent our support to dozens of campaigns. It’s been a busy year of solidarity, sharing skills, and amplifying the voices of young people in the climate movement.

Most impressive of all is the fact that, on top of all of this, almost everyone in our network is involved in their own campaigning and organising. From divestment campaigns to food co-ops, migrant justice to marine conservation, young people across Scotland are achieving incredible things.