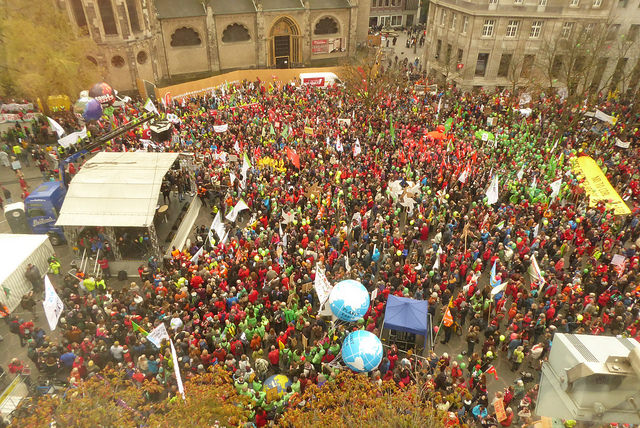 Inspiration to be found outside the climate talks

It can sometimes feel like there are multiple parallel universes in operation at the annual UN climate negotiations: what takes place inside the negotiating halls, what happens between nations and powerful corporations behind closed doors, and how it all plays out in the media to mention but a few. One of the most striking contrasts however, is between what goes on inside the official talks, and what goes on outside.

Copenhagen, Lima, Paris, and all the talks before, after and between them, were accompanied by alternative summits and powerful mass demonstrations to call attention to the realities of what climate change means and the demands of the climate justice movement. These alternative spaces produce vital counter-narratives and put massive pressure on countries to tackle the real issues at stake, but most of all they inspire new members and new generations of activists to join the fight for climate justice.

This year’s COP23 is no different, and sees civil society action at the Fiji led talks, hosted in Bonn, draw together two central asks of the climate movement: an end to the use of fossil fuels, and justice for impacted peoples.

On Saturday over 25,000 people took to the streets in the largest climate justice and anti-fossil fuel mobilisation in Germany to date. Coal, the dirtiest fossil fuel, still plays a significant part in Germany’s energy production, so on Sunday an estimated 4,000 people took an even more direct approach, heading to a vast nearby open coal pit to close it down for the day.

Throughout these actions, the Pacific Climate Warriors with their refrain – ‘we are not drowning, we are fighting’ – have made it clear what is at stake in this process. Small island nations like the Fiji hosts are amongst countries most vulnerable to the impacts of climate change, with the goal to limit warming to 1.5oC agreed at Paris, so that they “might survive”. Yet pledges by nations signed up to the treaty so far put us on a path to a minimum of 3oC: given the chaos caused by increases in extreme weather at the current level of only 1oC of warming so far, it’s clear we need far more radical action and fast.

While this COP won’t deliver any major outcomes, it will pave the way for important decisions to be made next year in Poland. The Paris Agreement set the framework for global emissions reductions post 2020, but it didn’t work out the details of how these would be achieved. Therefore, negotiating the Paris Rule Book will see many of the old battles re-opened between industrialised and industrialising countries, the rich and poor, as the West tries desperately to avoid its responsibility for the historical emissions that have taken us to the brink of climate chaos, and the global south fights for the finance and support critical to both adapting to the impacts of warming, and enabling clean development.

Scotland may not have a voice in the official climate negotiations, but as one of the first countries to bring in new climate legislation after the Paris Agreement we have a huge opportunity to show real climate leadership. The many positive announcements in the recent Programme for Government – including a Just Transition Commission, phasing out fossil fuel vehicles, and introducing low emissions zones around the country – as well as the recent ban on fracking, are all important steps in the right direction. But at present, the proposals for the new climate law outlined by the Scottish Government fall far short of the rhetoric of leadership. A fair shares approach would see Scottish targets of at least 77% emissions reductions by 2030, down to zero by 2040, yet the Scottish Government is looking to only 90% by 2050. We urge the First Minister and Cabinet Secretary to look beyond the official zones when they come to Bonn, listen to the voices of climate impacted people’s and act in response to the gravity of their plight when they return home.

Mary Church is Friends of the Earth Scotland Head of Campaigns.

Rowan explains how climate change has impacted upon her life and why she is travelling to Bonn. (2 Nov)