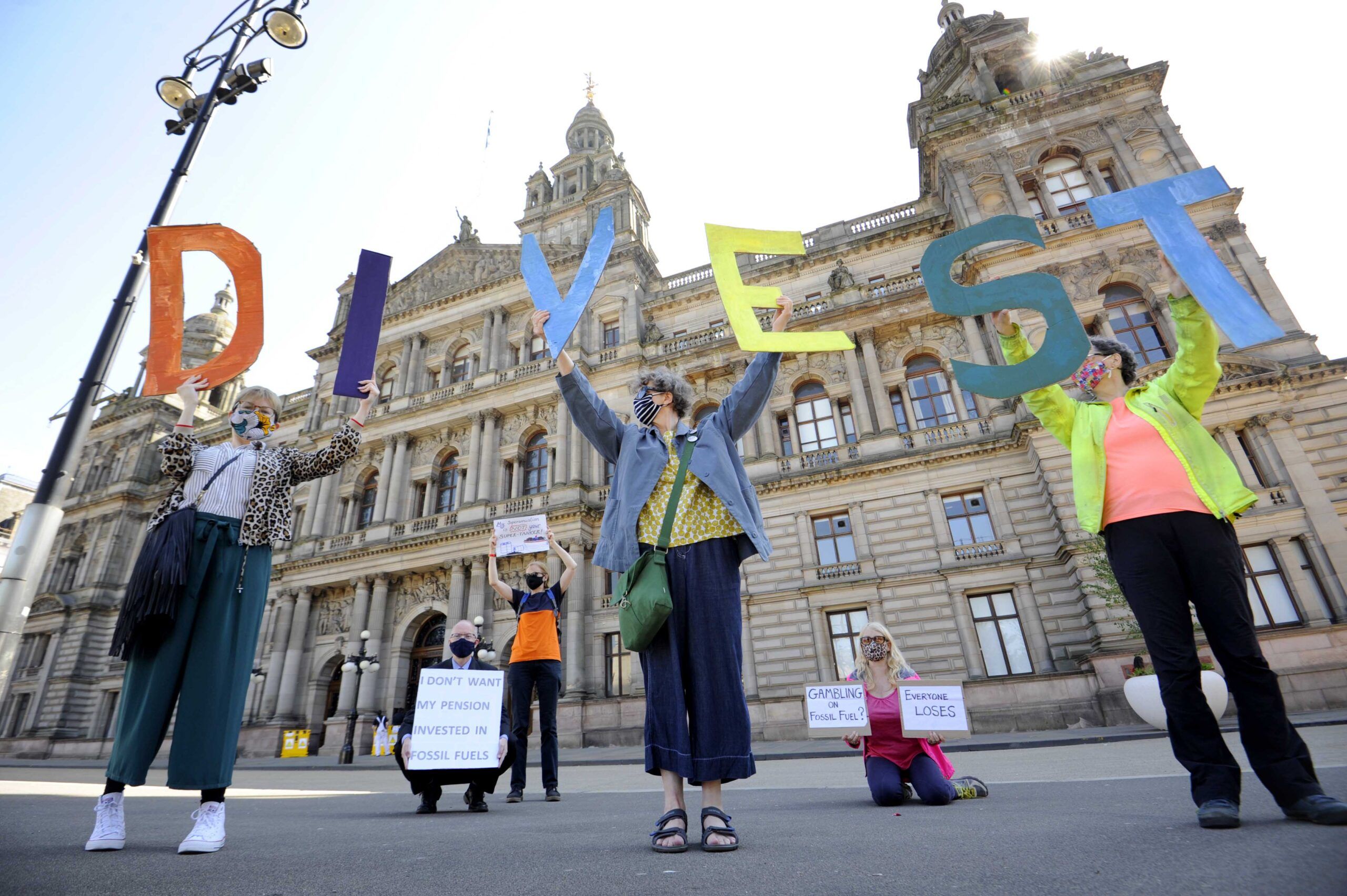 “It’s not an investment if it’s destroying the planet.” – Vandana Shiva

As Glasgow prepares to host the UN COP26 Climate Conference in November, climate campaigners across the UK are calling on Glasgow councillors to take urgent action to tackle the growing climate crisis by ending the Strathclyde Pension Fund’s £508 million investments in fossil fuels.

The Strathclyde Pension Fund is the joint largest local government fund in the UK and invests over £24 billion on behalf of 250,000 fund members in Glasgow and the West of Scotland.

A recent Friends of the Earth Scotland report revealed that the Fund holds £508 million of investments in highly polluting fossil fuel companies, including Shell, BP, Chevron and Exxon.

What happened in Glasgow this week

Yesterday, at a key meeting, Glasgow City Councillors on the Strathclyde Pension Fund Committee took a step towards addressing this by agreeing that the Fund would assess the climate impact of each company that the fund invests in, and divest from any companies which do not meet minimum climate standards.

But – and this is a big but – the motion that was passed does not define what these minimum standards will be or state a timeline for setting them. Nor does the motion explicitly commit the fund to divesting from fossil fuel companies.

We are concerned that if the minimum standards are too weak, the pension fund may continue to invest in fossil fuel companies that are making vague ‘net zero by 2050’ pledges whilst continuing to expand their extraction and burning of fossil fuels.

If something meaningful is to be done by COP26 a final decision on minimum climate standards must now be decided at a crucial Pension Fund Committee meeting in September.

Similar funds such as the Cardiff, Lambeth and Waltham Forest council pension funds have already committed to going fossil fuel free so there are already plenty of templates for the Fund to learn from. The next few months will be vital in determining whether the Strathclyde Pension Fund will join them.

Pressure on Councillors to back full divestment

Ahead of the vote activists from Divest Strathclyde and Extinction Rebellion Glasgow took part in online and socially-distanced protests outside Glasgow’s City Chambers. They urged the Pension Fund to invest in a sustainable future and stop investing in the fossil fuel companies that are most responsible for the climate crisis.

As Strathclyde Pension Fund member, Geraldine Clayton, highlights, there are strong financial reasons for the pension fund to divest and join over 1300 institutions around the world which have already have pledged to divest more than $614.56 trillion away from fossil fuels :

“Oil prices may rise and fall in the short term, but shares in fossil fuels are increasingly being seen as risky investments by the financial sector. Without government bailouts oil and gas companies would have been really struggling during the past couple of years. They are no longer the rock solid option they used to be. It makes no sense for the Strathclyde Pension Fund to continue investing in fossil fuels when it should be directing all its resources into creating a safer world for future generations.”

Environmental campaigners are now urging the councillors to agree on strong climate standards and a clear timeline at the next committee meeting. This would ensure that the West of Scotland makes climate history and starts removing the Strathclyde pension fund’s investments from coal, oil and gas companies before COP26 comes to Glasgow.

“I don’t want my pension to fund investment in the fossil fuel companies that are doing so much harm to the planet. I want the Strathclyde Pension Fund to invest in a sustainable future for my children and end its investments in fossil fuels. Today’s vote by the Pension Fund Committee is a small step towards more ethical investments but we now need rapid progress on strong climate standards for all its investments.”

How we can take action

Local campaigners from the Divest Strathclyde group in Glasgow already have an open letter calling on the pension fund to divest which has been signed by over 500 people.

We now need as many people as possible to sign the letter and support the campaign before the crucial September vote. If you would like to get involved in the campaign, Divest Strathclyde would love to hear from you and you can contact them here and  sign the open letter here.

There are also exciting plans for divestment campaigns for the Falkirk, Highland and Lothian Council regions this summer and you can contact Friends of the Earth Scotland if you would like to get involved in these areas.

This is a key opportunity for us to make sure that Scottish pension funds lead the way in acting for climate justice by setting firm and fast targets to divest from fossil fuels. With your help, this is Glasgow’s chance to make history.