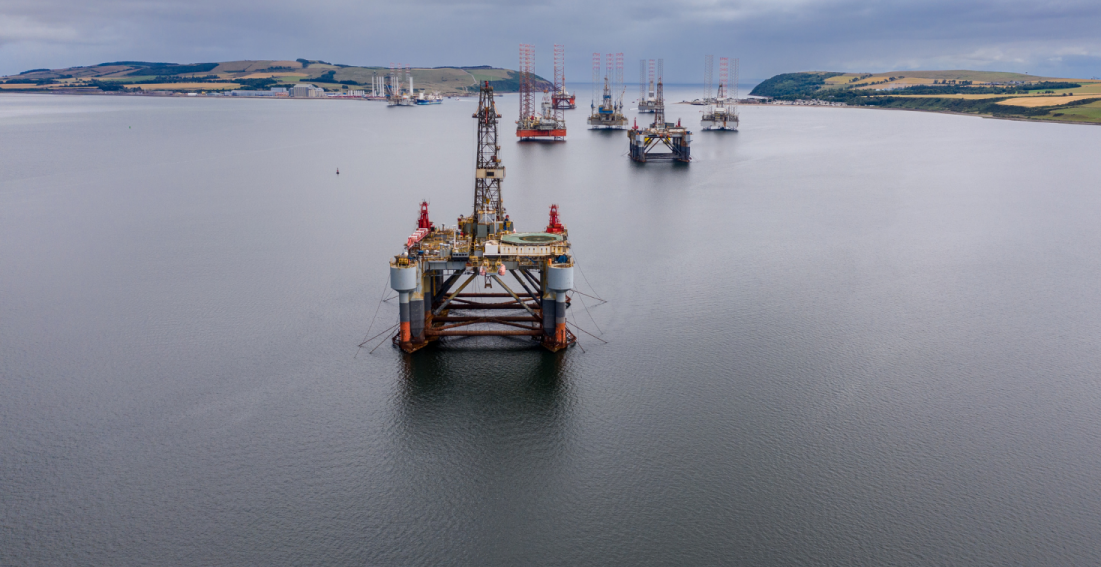 Our new ‘Watershed‘ report, published together with Oil Change International, reveals that the UK has increased its oil and gas reserves since declaring a climate emergency in 2019. An extra 800 million barrels of oil have been added in the last two years.

Burning all this oil will create climate pollution equivalent to running Longannet, Scotland’s last coal power station, for over 35 years. There would rightly be uproar if the UK tried to open another coal power plant so we should be similarly outraged about more fossil fuels being drilled in the North Sea.

This is happening because it is currently UK law to extract every last drop of this oil regardless of its devastating climate impact. This policy is also supported by the Scottish Government in their own Energy Strategy.

The toxic combination of political and financial support for huge oil companies means there are now 6.5 billion barrels of oil in UK developed fields (that’s fields that are currently open and being drilled, or are under development) with another 13.5 billion in fields earmarked for future development.

We know that oil and gas are the accelerants of the climate fire engulfing the world, yet both the UK and Scottish Governments are encouraging major polluters to keep on drilling for decades to come. They want to drill for every last drop from the North Sea – 20 billion barrels – which would triple UK emissions from oil and gas.
Our ‘Watershed‘ report shows that there can be no new oil and gas developments in UK waters if we are to uphold our commitment to the Paris climate agreement goal of limiting dangerous warming to 1.5ºC.   This means the UK and Scottish Governments must reject all new oil & gas drilling, starting with the controversial Cambo oil field off Shetland which contains 800 million barrels of oil and gas.

A managed phase out must start now


We know that the emissions from oil and gas in already developed reserves around the world will push us far beyond 1.5°C of warming. The United Nations Production Gap report states that governments around the world are planning to produce more than twice the amount of fossil fuels by 2030 than is compatible with 1.5ºC, and that all countries need to wind down production, but “some more rapidly than others”. As a wealthy nation, the UK must act faster.

A managed wind down of North Sea oil and gas must start now, phasing out production over the next decade and closing some reserves early, before all of the oil and gas within them has been extracted. 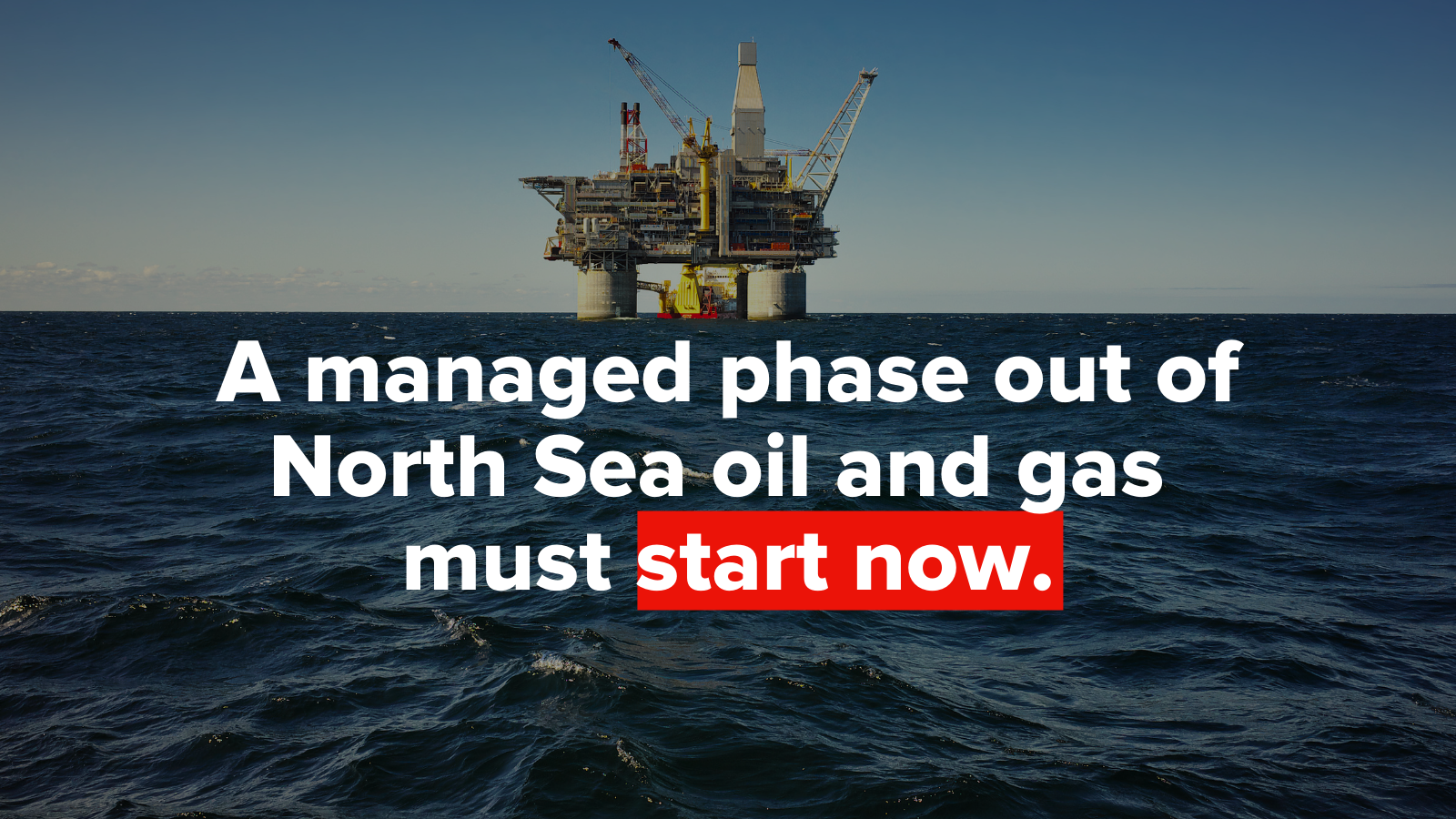 
Every new oil and gas development slows the transition to renewables and moves us further away from the ‘just transition’ for workers and communities currently reliant on oil and gas.

Fossil fuels suck investment from renewable energy. The UK Government needs to end subsidies and tax breaks for the oil industry, and shift that investment and policy support into renewables and the just transition.

Just Transition away from fossil fuels


In the last year, over 10,000 workers have been made redundant from the oil and gas industry with many reporting they have been unable to transfer their existing skills and experience to renewables work.

Our report makes clear that continuing to invest in new oil and gas slows the transition, and damages the prospects of a well-planned just transition for workers.

Continuing to pursue maximum extraction by developing new fields until worsening climate impacts force rapid action to cut emissions globally will result in a deferred collapse of the UK oil industry, pushing many workers out in a short space of time.

Whereas a managed transition with no new oil and gas developments and a phase-out of extraction in line with Paris climate goals gives the most reliable framework for ensuring a just transition for workers and communities and building decent jobs in a clean energy economy.

Previous research by FoES, OCI and Platform showed that with the right policy and investment, more than 3 jobs in clean energy could be created for every one oil and gas job.

Coming just weeks before the crucial UN climate talks COP26 in Glasgow, the ‘Watershed’ report calls on UK and Scottish Governments to cease all new oil and gas field developments. 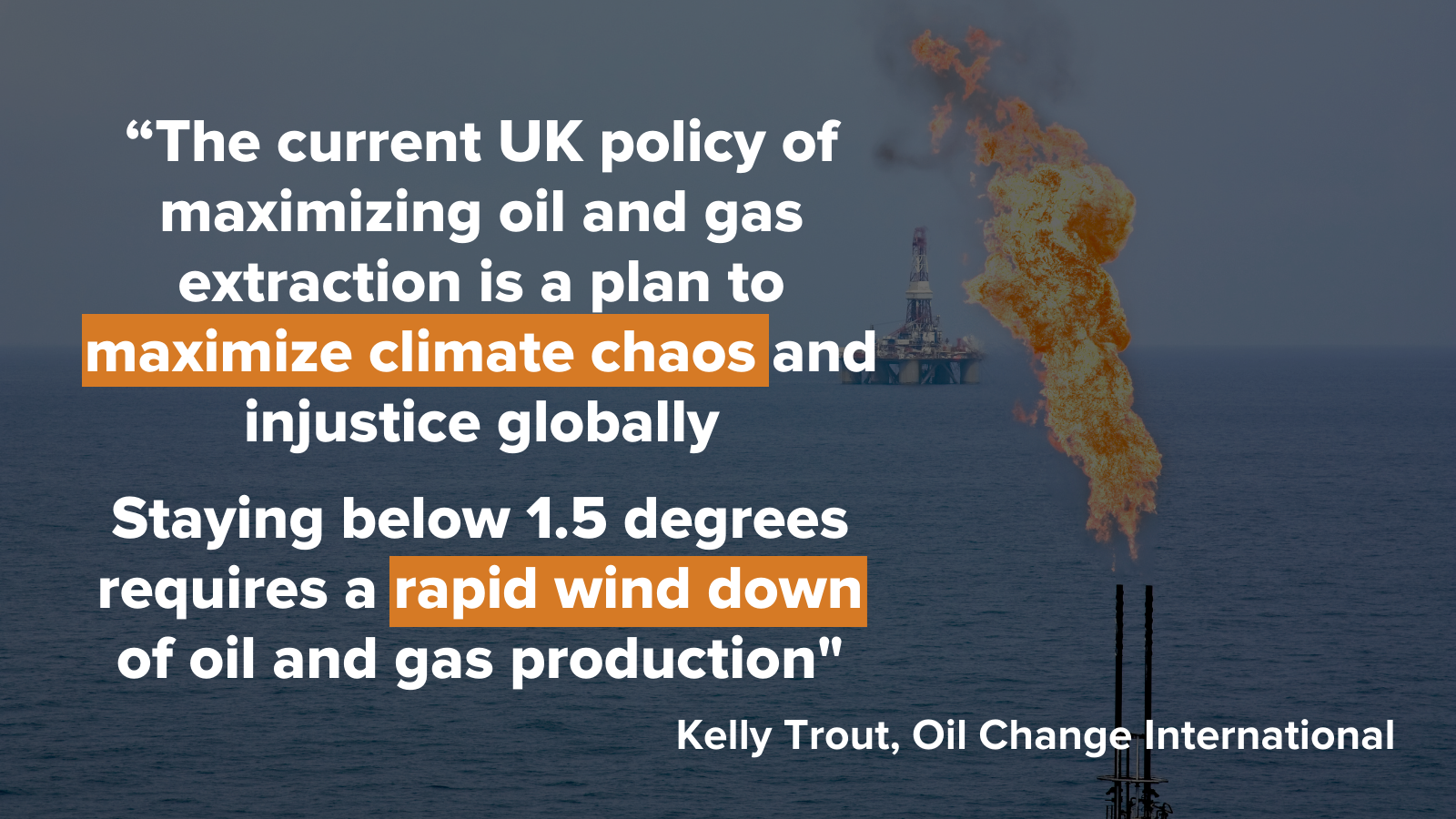 Kelly Trout, Research Co-Director at Oil Change International who co-published the report said “The current UK policy of maximizing oil and gas extraction is a plan to maximize climate chaos and injustice globally.”

“Staying below 1.5 degrees requires a rapid wind down of oil and gas production and it’s wealthy producers like the UK that have the means to move first and fastest. Ahead of COP26, the Scottish Government’s own climate credibility rests on demanding a sea change in UK policy away from extraction, including ending new oil and gas development and maximising investment in a just phase-out of production.”


But it’s not just climate campaigners who say that we must phase out oil. The UN Secretary General Antonio Guterres said that the recent IPCC ‘code red’ report “must sound a death knell for coal and fossil fuels, before they destroy our planet… Countries should also end all new fossil fuel exploration and production, and shift fossil fuel subsidies into renewable energy.”

The United Nations Production Gap report states that governments around the world are planning to produce more than twice the amount of fossil fuels by 2030 than is compatible with 1.5ºC. The International Energy Agency recently warned that there can be no new coal, oil or gas developments opened if the world is to stay within the 1.5C temperature limit as agreed by nations.

The report comes two days after 2,185 scientists and academics call on governments around the world to end new fossil fuel expansion and phase out existing production through a Fossil Fuel Non-Proliferation Treaty.

Our governments are currently taking us in the wrong direction. But we can change that, just like we stopped fracking.

How you can get involved in the campaign to Stop Cambo and new oil & gas:

Contact your MPs in Westminster, and ask them to oppose Cambo. You can use this online toolkit.

If you want to get more involved, enter your details here for regular Stop Cambo calls and updates.