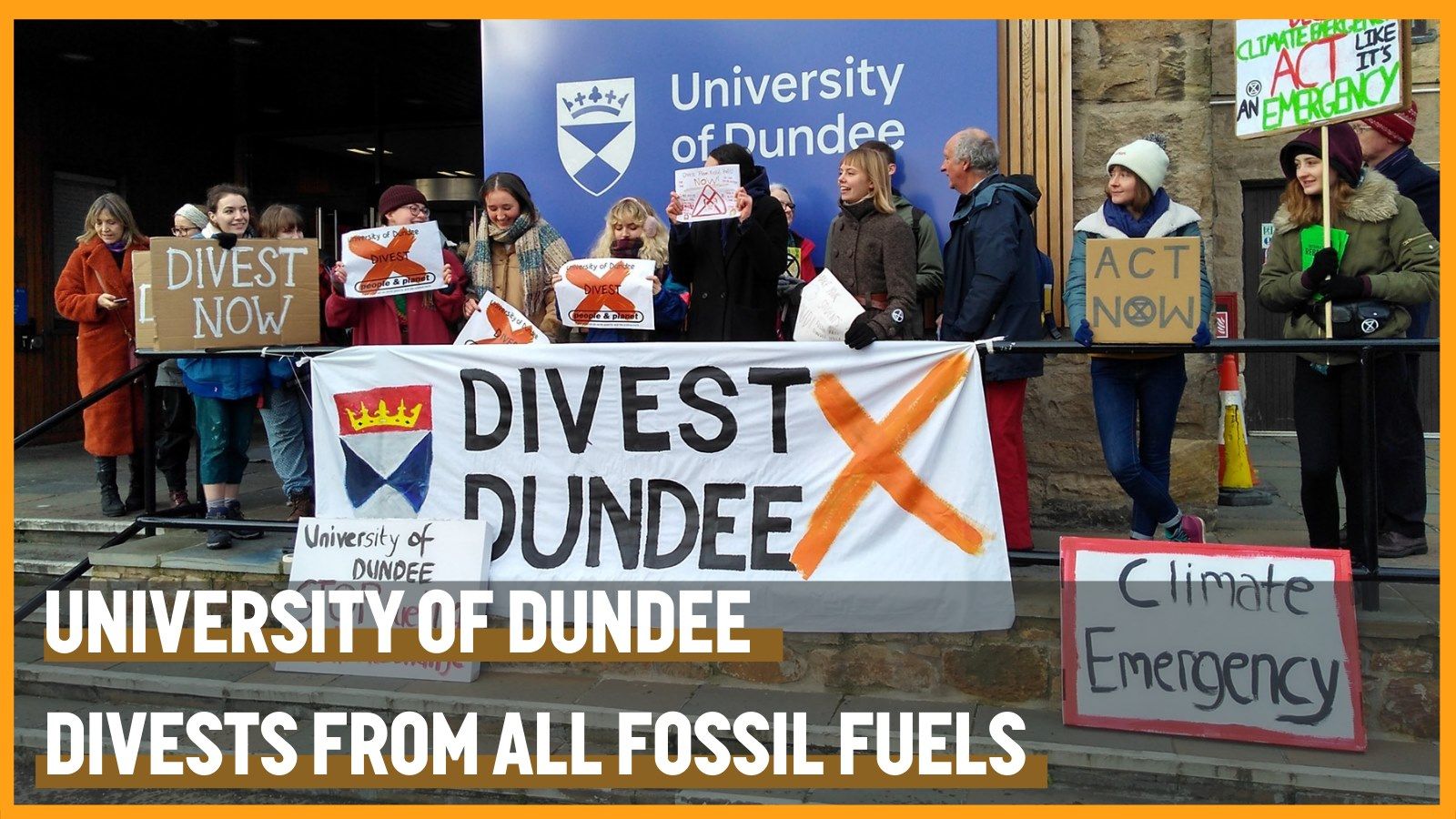 The University of Dundee became the latest organisation in Scotland to withdraw their investments from fossil fuel companies on environmental grounds today. (1)

The announcement affects millions of pounds of the University’s investments and reflects growing public distaste for companies which are not supporting action on the climate crisis.

“We have a duty to play our part in responding to the climate emergency, and there needs to be actions as well as aspirations. With that in mind we are divesting from fossil fuel companies. We have listened to the staff and student voice on this issue, and they have rightly pressed us to take clear and timely action.

The decision has been welcomed by campaigners. Ellie Harrison, Lecturer in Contemporary Art Practice and member of the Divest Dundee campaign, said:

“It’s brilliant to hear that the University has finally committed to divesting its Endowment from fossil fuels. We have been creating awareness for this issue within the University community for the last five years, and submitted our Divest Dundee petition to the Endowment Committee last November. If our University truly cares about building a better future for our students and our local community, then it’s essential we practise what we preach.”

Natasha Ion, from People & Planet, the largest student network in the UK campaigning for social and environmental justice, said:

“It is great to witness the University of Dundee become the 85th UK university to make a fossil fuel divestment commitment. This announcement to full divestment shows the strength & collective power of staff & students working alongside each other.

“It also shows how meaningful international solidarity with frontline communities can be enacted in a time of multiple crises.

“We look forward to seeing the University enshrine this commitment in policy & continue to work alongside Dundee divestment organisers – from decisions around where Dundee moves their money, to further actions that can be taken toward a future premised on climate & social justice.”

The majority of Scotland’s higher education institutions are now phasing out investment in fossil fuels, and a number of prominent arts organisations have chosen to end their relationships with the companies driving climate breakdown, including the Scottish National Galleries. (2)

Attention is now turning towards pension investors, such as the Scottish local government pension schemes, which according to the most recent data have £1.8 billion invested in oil and gas companies. (3)

“Oil and gas companies are making a huge PR push to try and hoodwink us into believing that burning fossil fuels can carry on indefinitely. Investors like Universities, egged on by diligent student activists, are starting to see the reality that fossil fuels and the companies that produce them must be replaced with renewable sources of energy. A just transition to zero-carbon economy is what’s needed, and it’s wonderful that investors like the University of Dundee are committing their cash to making it happen.”

3. ‘Councils: Fuelling the Fire’ published by Friends of the Earth Scotland
https://foe.scot/resource/councils-fuelling-fire/

4. Friends of the Earth Scotland is:
· Scotland’s leading environmental campaigning organisation
· An independent Scottish charity with a network of thousands of supporters and active local groups across Scotland
· Part of the largest grassroots environmental network in the world, uniting over 2 million supporters, 75 national member groups, and some 5,000 local activist groups.
www.foe.scot