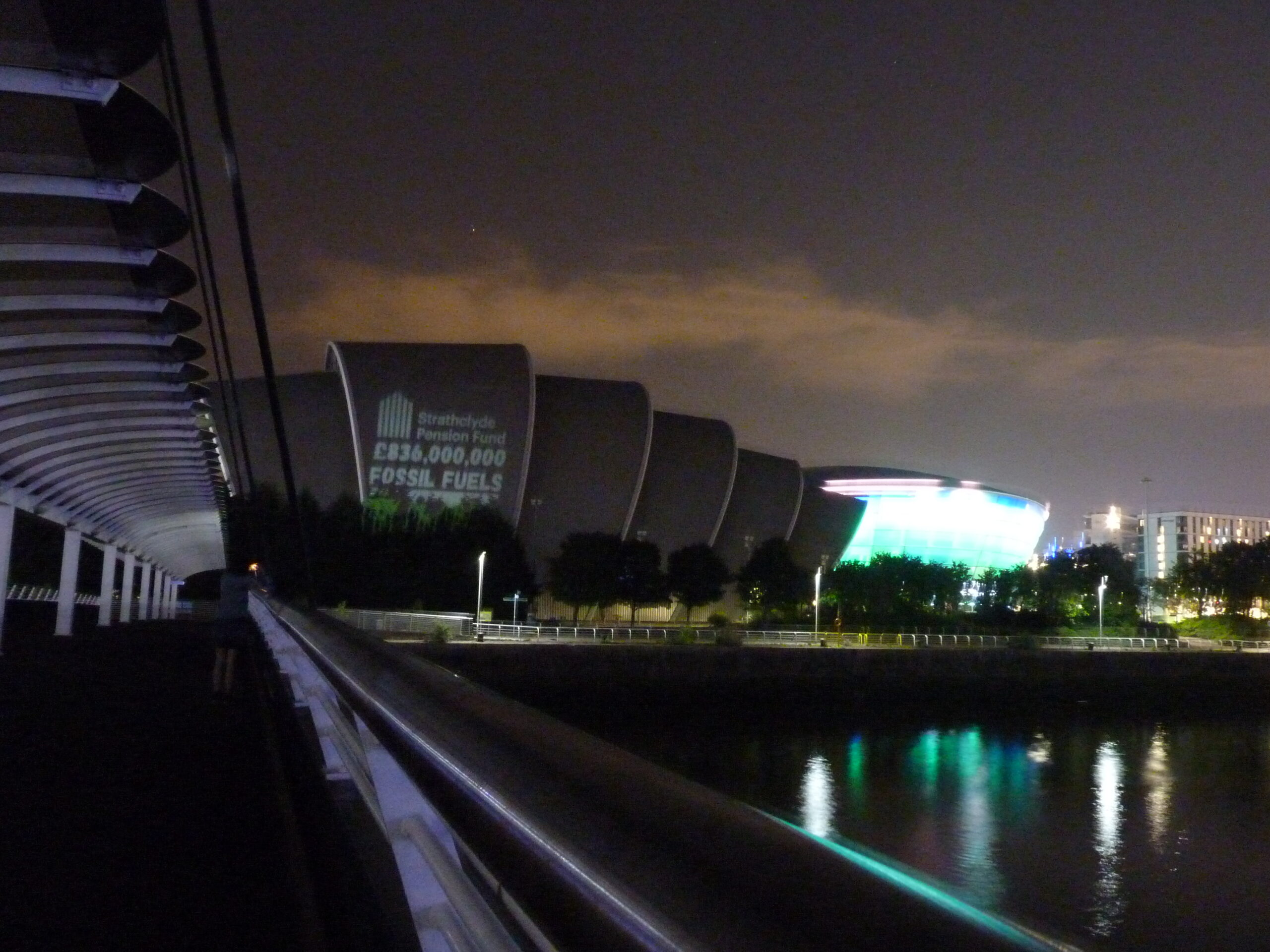 Climate activists have revealed the huge scale of Glasgow’s investments in fossil fuels by projecting the shocking figure onto the SEC Armadillo building. The SEC will shortly play host to climate crisis talks between world leaders at the UN climate summit.

The protest highlighted data published last night in a new report by Friends of the Earth Scotland that estimates the Strathclyde Pension Fund, run by Glasgow City Council, invests £836 million in fossil fuel companies responsible for driving the climate emergency.

The research showed that companies invested in include BP, Chevron and Shell and estimated that due to the growth in value of outsourced investments the Fund’s stake in fossil fuels had grown by a staggering £218 million since 2020. Shell are 30% owners of the controversial new Cambo oil field off the coast of Shetland.

The report also details how pension funds in New York, London and Sweden have successfully moved away from fossil fuels.

The protest sought to encourage City Councillors to agree a transparent plan to actually begin divesting from fossil fuels at a key meeting on 8th September.

September’s meeting follows a Glasgow City Council motion in April that requested a “formal commitment to fossil fuel divestment prior to COP26” from the £25 billion Strathclyde Pension Fund, and a June decision that divestment could now be considered for companies who were damaging the climate.

The Strathclyde Pension Fund is the joint largest local government fund in the UK and is run on behalf of 250,000 fund members in Glasgow and the West of Scotland.

Isla Scott from Divest Strathclyde said: “This new report points to a worrying trend of fossil fuel industry investments hidden away in pooled funds. If the Strathclyde Pension Fund is going to follow through with a commitment to divest from climate-wrecking companies then it must take responsibility for these indirect investments as well, otherwise the climate criminals will be able to carry on with business as usual and undermine global climate efforts. As COP26 fast approaches, Glasgow City Council must show climate leadership and take decisive action to make sure divestment from fossil fuels happens in a rapid and orderly way.”

Ric Lander from Friends of the Earth Scotland said: “Through its pensions Glasgow City Council invests far more public money in fossil fuels than any other Scottish organisation. A cleanup has been floated and the rhetoric is encouraging, but the toxic puddle of money keeps growing. We, as citizens and pension fund members, must speak out against this mess.

“On 8th September city councillors have the opportunity to actually divest from fossil polluters. We are watching. With world leaders booking their hotels for November’s UN climate talks, this is the last moment for Glasgow City Council to be bold and do the right thing. In 2021 Scotland can leave fossil polluters behind on our way to a just transition to a sustainable future.”

Free to use photos

Free to use photos of the protest can be downloaded from here. If necessary they may be attributed to ‘Divest Strathclyde’.

1. The briefing ‘Fossil fuel divestment and the Strathclyde Pension Fund’ is published at: https://foe.scot/resource/spf-ctte-brief-aug-2021/
The SPF have not published their own analysis of third party investments and sent no reply to the figures, shown to them in confidence two weeks ago.

2. In June 2021 Glasgow City Councillors deferred a decision on what to do with fossil fuel investments, whilst agreeing that divestment could take place in principle.
https://foe.scot/press-release/divestment-on-the-table-but-glasgow-still-waiting-for-500-million-decision-on-fossil-fuels/

4. Divest Strathclyde is the campaign to get the Strathclyde Pension Fund to drop investments in fossil fuel companies and other big polluters, and re-invest the money in ethical and sustainable alternatives.
https://www.gcop.scot/divest-strathclyde/

5. Friends of the Earth Scotland is:
* Scotland’s leading environmental campaigning organisation
* An independent Scottish charity with a network of thousands of supporters and active local groups across Scotland
* Part of the largest grassroots environmental network in the world, uniting over 2 million supporters, 73 national member groups, and some 5,000 local activist groups.