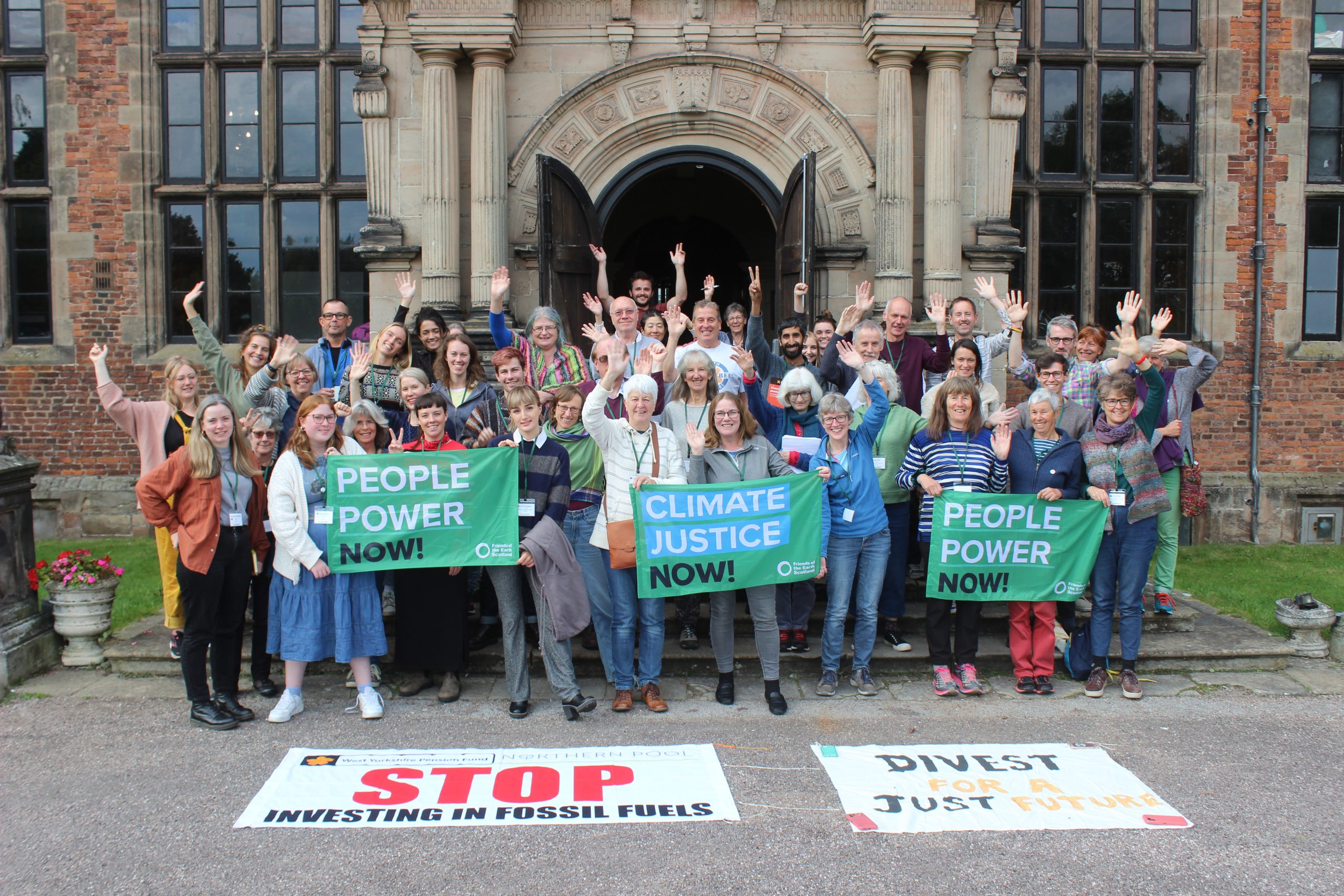 2022 has been an exciting year for our campaign to call on Scottish councils and MSPs to end their pension fund investments in fossil fuels.

In the Scottish Parliament, 46 current and former MSPs have now signed the pledge to divest their pension fund from fossil fuels. You can see a list of MSPs who have made divestment commitments here.

In local politics, we have been working alongside amazing campaigners from groups including Divest Lothian, Divest Strathclyde and Friends of the Earth Falkirk to shift an estimated £1.2bn of Scottish council pension money away from fossil fuels.

These are just some of the highlights from the year.

We had a very important breakthrough in the Divest Lothian campaign after City of Edinburgh councillors voted in favour of ending the fund’s £229 million investment in fossil fuels.

Across Scotland, we’re seeing growing support from councillors for removing fossil fuel investments and instead investing in ethical alternatives that will benefit communities such as renewable energy and social housing.

Progress in the campaign to divest the Strathclyde Pension Fund

In Glasgow and the West of Scotland, we’re continuing to work with Divest Strathclyde and supportive councillors to call on the Strathclyde Pension Fund to stop investing £836 million in fossil fuels.

Despite last year’s commitment from the councillors in the Strathclyde Pension Fund Committee to divest from companies that do not meet minimum climate standards, a recent report has shown that the fund is continuing to invest in some of the world’s biggest polluters, including BP, Shell and Equinor.

Fortunately, a growing number of councillors in the Strathclyde region are joining Divest Strathclyde and Glasgow City Council in calling on the fund to divest. They include South Lanarkshire Council which voted in September to tell the Strathclyde Pension Fund to end its investments in fossil fuels “as quickly as possible.”

In the spring, we joined UK Divest and campaigners across the UK to call on local election candidates to pledge to support divesting their council pension funds from fossil fuels.

Following the elections, councillors were invited to a UK Divest webinar on securing climate-friendly pension investments. You can watch the webinar here and please feel free to share it with your local councillors.

In March, we were delighted to join Friends of the Earth Falkirk and Fridays for Future Scotland for a special climate strike in Falkirk where we marched through the town and spoke to local politicians and members of the community about the importance of divesting the Falkirk Pension Fund from fossil fuels.

In October, we were joined by ethical investment expert and founder of the Carbon Tracker Initiative, Mark Campanale, for a special event in Glasgow with Unison Scotland and Divest Strathclyde to discuss how our investments can be a key part of building a more sustainable future for both people and the planet. If you missed it, you can watch the video of Mark’s presentation here.

In September, we joined divestment campaigners from across the UK for the Fossil Free Gathering.

The gathering brought together 50 grassroots activists passionate about climate justice, including four campaigners from the Divest Strathclyde, Divest Lothian and Divest Falkirk campaigns. The weekend was a great opportunity for everyone to build connections, share their experiences of fossil fuel divestment campaigning and develop the skills needed to win their local campaigns.

We also heard from amazing international and UK-based climate activists about how ending fossil fuel investments is a key means of achieving climate justice.

One of the activists who took part from Scotland is Dylan from the Divest Falkirk campaign and you can find out more about his experiences at the gathering here.

If you’d like to get involved in any of these campaigns, we’d love to hear from you!

You can email us at info@foe.scot and we can help to connect you with local groups and other divestment campaigners.

We’re very excited to join UK Divest and climate activists across Scotland and the UK to plan for our biggest ever national day of action on Friday 24 March 2023 to call on our local institutions to stand up for climate justice and cut ties with the fossil fuel industry.

Get involved with the day of action
Join Friends of the Earth Scotland
This site uses cookies to store information on your computer. To find out how we use them please view our Privacy Policy.Accept AllNo Thanks
Manage consent