2021 was undoubtedly the biggest year of climate action in Scotland’s history. We're celebrating some of the wins.

2021 was undoubtedly the biggest year of climate action in Scotland’s history. Huge progress was made across key environmental issues. Now that the year is drawing to a close, it’s important that we remember and highlight the success our movement is having.

Here are 12 huge reasons to feel positive from the past 12 months. 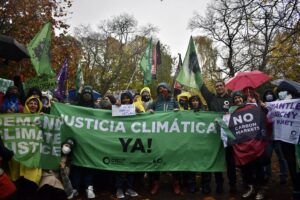 Over 150,000 marched through Glasgow to demand climate justice. The wet weather didn’t deter people from joining the largest climate march ever in Scotland.

The march organised by the COP26 coalition brought together many different groups in recognition of the multiple crises we face. The same system is causing these problems, whether it is climate breakdown, to racism, to low pay to the responses to Covid-19.

Attendees heard how we need to change the system from the ground up, and how climate solutions must be based on justice, redistribution of resources and decentralisation of power. This was a powerful moment of global solidarity as the world was welcomed to Glasgow and hundreds of other events took place simultaneously in different countries.

2. Shell pulled out of Cambo 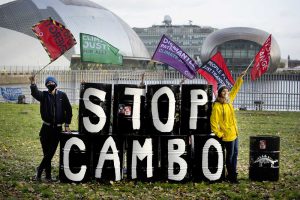 People power forced the oil giant Shell to pull out of the Cambo oil field leading to the project being paused. This great news arrived after months of fierce opposition to the project and scrutiny from the public, climate groups and politicians.

This is a big win for the campaign but the work isn’t finished yet. We need to ensure that it is officially rejected and the UK Government stops giving licences out to new fossil fuel projects. Its time to focus on supporting workers and communities as we transition away from oil and gas.

3. Scottish Government backed away from ‘drill every drop’ policy 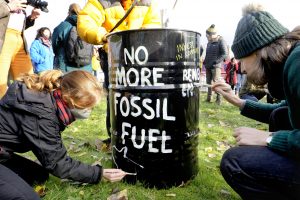 The First Minister announced in October that the Scottish Government no longer supported drilling every last drop of oil from the North Sea. Again huge public pressure around the Cambo field and COP26 forced this welcome change of position.

This change of tone must be followed by a concrete change of policy when Scotland’s new Energy Strategy is unveiled next year. We’ll need your help to hold the Government to its word.

4. Single use plastics have been banned

The Scottish Government introduced regulations to ban a range of single use plastic items including plastic cutlery, plates, straws and polystyrene food containers and cups.

There was huge public support for this move, with 94% of those replying to the consultation saying they were in favour of the ban. It’ll come into effect early next year and help cut plastic pollution as well as climate-changing emissions.

5. A moratorium on new incinerators has been put in place

The Scottish Government has put a pause on all new incinerator applications while a review into the polluting practice of burning waste is taking place.  Incineration rates had been spiralling out of control.

A temporary moratorium like this was the beginning of the end for fracking, and we want to see this turning into a permanent ban on new incinerators in Scotland.

6. Strathclyde Pension Fund is close to divesting from fossil fuels 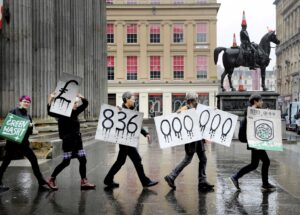 Glasgow Councillors voted to back divestment from fossil fuels in April this year. This marks real progress in the long-running campaign to end the £800million investment in climate-wrecking companies.

Unfortunately the policy approved by those managing the Strathclyde Pension Fund sets the bar so low that most oil companies would likely be retained. There is still time for councillors to improve these plans, and we’ll be keeping the pressure on to make sure they deliver on real divestment.

7. COP travel cards could pave the way for integrated transport 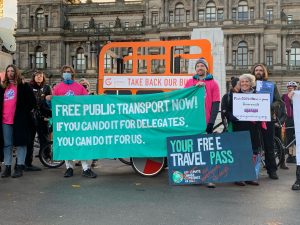 During COP26, all delegates to the conference were given travel passes which could be used on all bus networks, trains, Glasgow’s subway and Edinburgh’s trams.

This is the first time that integrated transport like this has been on offer in Scotland, and has proven that it’s possible. Now a similar system needs to be put in place for locals.

A large area of Glasgow city centre is going to become a car free zone. This will be a great step forward for Glasgow in the urgent task of reducing climate emissions and will make the city a better place to live at the same time, with more space for people and cleaner air. 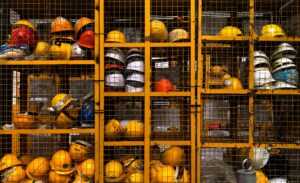 Expensive training and unnecessary bureaucracy made people’s lives harder and blocked them from new job opportunities.

That’s why we are building support for an ‘Offshore Training Passport’, which would create standardised training programmes across the energy industry. MSPs held a debate in Parliament to discuss the idea.

Read about what was said and more background to the demand

10. Wider understanding of why false ‘solutions’ like CCS and hydrogen won’t work

2021 has seen political support ramp up for dangerous climate distractions. We’ve been there every step of the way highlighting the huge issues and danger in relying on ideas like carbon capture and storage and hydrogen.

The expert report we commissioned from the Tyndall Centre found that CCS would not be able to deliver the necessary cuts to emissions from the energy sector this decade. This helped push Holyrood Committees to demand that the Scottish Government develop a ‘plan B’ for when these industry-backed schemes didn’t materialise.

11. The Right to a Healthy Environment to become law 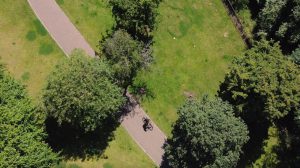 In March this year, the Scottish Government’s National Taskforce for Human Rights Leadership recommended that ‘the right to a healthy environment’ should become law in Scotland.

The proposals came as part of a new human rights law that should be brought forward in the current term of the Scottish Parliament.

Everyone in Scotland deserves to live in a safe, clean, and healthy environment and climate breakdown and the pandemic underscores how essential a safe environment is to achieving all our other human rights.

12. People in Glasgow opened their doors to the world 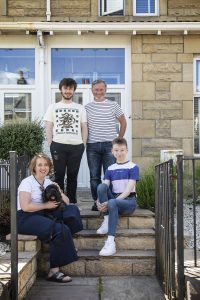 Thanks to the wonderful efforts of Stop Climate Chaos Scotland, the COP26 coalition and Human Hotel people with spare rooms were linked up to those needing a roof over their heads during COP26. The cost of hotels and accommodation skyrocketed in Glasgow which risked locking people out of the talks.

Policy makers, activists and scientists were welcomed into homes across the central belt in the Homestay Network. New friendships were formed and connections made that will hopefully endure long beyond this year.

There was so much other fantastic work going on throughout this year.  The successful campaign by Glasgow Calls Out Polluters to keep polluting companies out of COP26, Fridays for Future Scotland organising a huge climate march, commitment to significantly increase funding for walking and cycling and much more.

These are just a small selection of our highlights from the year but they show the breadth and impact of our work with activists, local campaign groups, allies and committed politicians.

Thanks to everyone who was part of it in 2021 and we look forward to achieving even more in 2022!