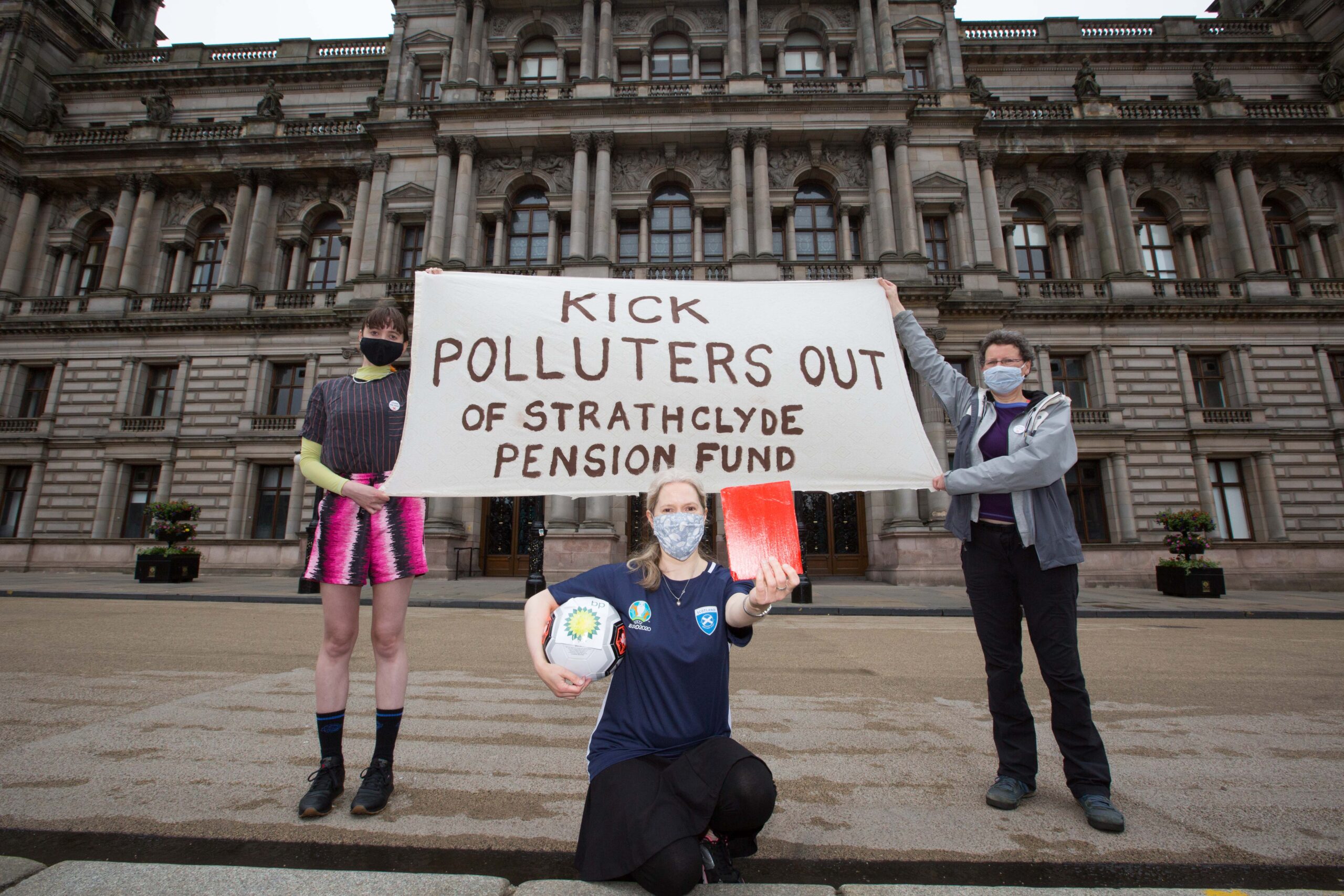 Climate justice activists are taking part in online and physically-distanced protests in Glasgow today to coincide with the Strathclyde Pension Fund AGM demanding an end to its £508 million investments in coal, oil and gas companies in order to tackle the worsening climate crisis.

Earlier this month Glasgow Councillors on the Strathclyde Pension Fund Committee agreed to remove investments from any companies that do not meet minimum climate standards. However, they did not agree on a timeline and the criteria of these climate standards has not yet been decided.

Campaigners at Divest Strathclyde are calling for these criteria to be strong and not be subject to industry ‘greenwashing’ by fossil fuel companies. Plans by oil and gas companies to keep exploring for and extracting fossil fuels are not aligned with global commitments to limit global heating to 1.5°C.

*** Free to use, print quality photos from the Glasgow protest available **
https://drive.google.com/drive/folders/11ZufpfnUEu0lFY_iHMLg1DXRzmc68wM0

The Strathclyde Pension Fund is the joint largest local government fund in the UK worth an estimated £24 billion. It is run on behalf of 250,000 fund members in Glasgow and the west of Scotland.

Divestment of Strathclyde Pension Fund’s fossil fuel investments would be the largest of its type ever in the UK. Campaigners say that a final divestment decision in September would show Glasgow’s commitment to climate action as it prepares to hold the UN climate conference COP26 in November.

“With the UN climate talks coming to Glasgow, the Pension Fund must be instructed to set a clear, time-bound path that results in the selling off of their shares and investments in these fossil fuel polluters. By being allowed to continue to pour money into oil and gas, fund managers are gambling that climate policies being set by Councils and Governments will fail.

“The vast majority of coal, oil and gas reserves must remain in the ground if global heating is to be limited to the levels pledged by governments across the world. Councillors must seize this moment and keep pushing for the action that will end investments in the polluting companies who are speeding us to climate catastrophe. “

“The decision taken by the Pension Committee to review their investments to ensure they are consistent with the requirement to achieve net-zero carbon is welcome. However, the assessment that they are to undertake must be transparent and ensure that it genuinely identifies those investments in companies that continue to seek to exploit fossil fuels.

“Council-run pension funds such as those in Cardiff, Lambeth and Waltham Forest pension have already committed to going fossil fuel free so there are already plenty of good templates for the Strathclyde Fund to learn from. The next few months will be vital in determining whether the Strathclyde Pension Fund will make the right choice for people and planet and leave fossil fuels behind.”

Activists from across the UK are posting images on social media of themselves holding placards with slogans including #DivestStrathclydePensionFund, #CleanupOurPensions and #DivestFromClimateCriminals.

In April 2021, Glasgow City Councillors voted by a majority of 69 votes to 4 in support of divesting the pension fund from fossil fuels with support by the SNP, Labour and Scottish Greens[5]. Divestment also featured as part of the city’s recently published Climate Emergency Implementation Plan.

*** Free to use, print quality photos from the Glasgow protest will be available at: https://drive.google.com/drive/folders/11ZufpfnUEu0lFY_iHMLg1DXRzmc68wM0

[1] The socially-distanced protest was carried out within government guidelines with participants wearing masks throughout.

[4] A report by research organisation Oil Change International published in September 2020 revealed that ‘none [of the largest integrated oil and fossil gas companies] come close to aligning their actions with the urgent 1.5°C global warming limit as outlined by the Paris Agreement’. http://priceofoil.org/2020/09/23/big-oil-reality-check/

[5] On 1st April 2021 Glasgow City Council endorsed a plan to end their £500 million investment in fossil fuels. The motion was approved by a full meeting of Glasgow City Council by a margin of 69 votes to 4 against: .
https://foe.scot/press-release/climate-activists-celebrate-glasgow-city-council-support-for-campaign-to-end-500-million-fossil-fuel-investment/

[7] For more information about fossil fuels and divestment, please read:
Divesting to Protect Our Pensions and the Planet, 2021 Report: https://foe.scot/resource/divest-councils-2021/
List of organisations who have divested: https://foe.scot/campaign/fossil-fuel-divestment/commitments/

[8] Divest Strathclyde is the campaign to get the Strathclyde Pension Fund to drop investments in fossil fuel companies and other big polluters, and re-invest the money in ethical and sustainable alternatives.
https://www.gcop.scot/divest-strathclyde/