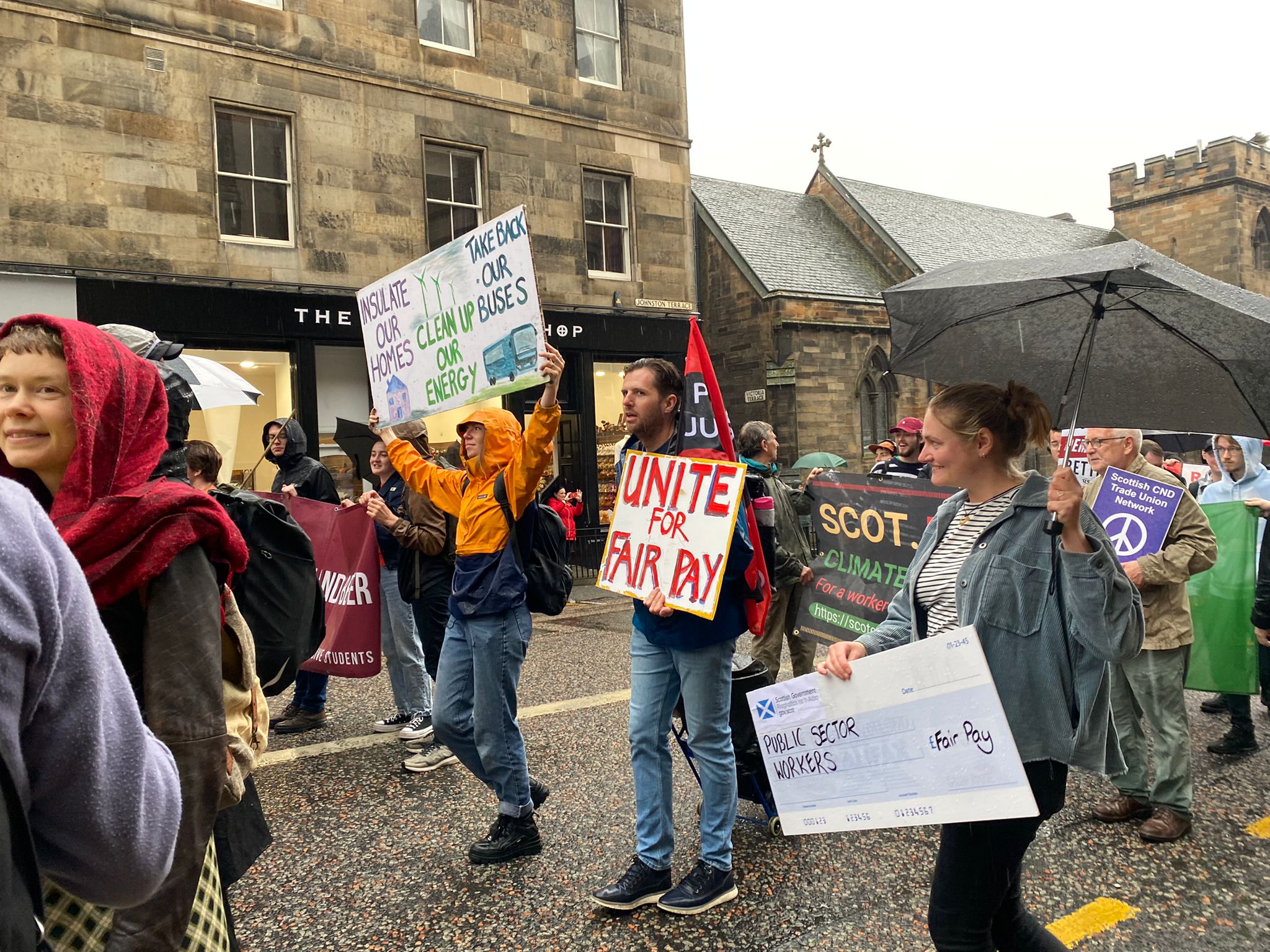 2022 has been a year of steady progress in our campaign for a just transition away from fossil fuels. We’ve been meeting with workers in the oil and gas industry, campaigning alongside trade unions for a transformative shift in our economy and supporting communities on the frontline of the fossil fuel industry in Scotland.

We are yet to see the seismic shift from the Scottish Government or local authorities that is necessary to deliver a just transition. However, there are signs of progress with first steps being taken by politicians and most importantly, a growing pressure from climate and labour activists to create an energy system that works for people and the planet, not profit.

These plans must set out how emissions will be reduced, new jobs created and wealth retained within communities across the country. Importantly, the workers and communities to be affected must be engaged and around the table, shaping the future direction of their lives and livelihoods.

The first Just Transition Plan is focused on the energy sector and has been in development throughout 2022. We’ve told the Government what we want to see as well as creating opportunities for others in the climate movement to be involved.

The Energy Strategy and Just Transition Plan sets the framework for Scotland’s energy system over this crucial next decade for climate action. There is an opportunity to put in place the foundations for a just transition that can meet our fair share of global efforts to avoid catastrophic warming.

It will be laid out by the government at a time when oil companies are posting record profits and expanding into new fields across the world. The plan must chart a path away from climate-destroying fossil fuels to an affordable, reliable energy system, powered by renewables and run in the public interest.

Building with workers and communities

Throughout 2022, we’ve campaigned for an Offshore Training Passport to standardise training qualifications required to work in offshore oil and renewable energy.

Right now, offshore workers are largely paying for their own training and there are different qualifications required to work in oil than are needed to work elsewhere in the energy sector. That means any workers looking to move out of fossil fuels are forced to duplicate their existing training in order to transition, often out of their own pocket.

To fix this injustice, we’ve put forward amendments to the UK Parliament, brought a debate to Holyrood and put a spotlight on this issue in the media. Thanks to the campaigning of climate activists, trade unionists and offshore workers themselves – OPITO, the oil training body, committed in May 2022 to create an Offshore Training Passport that is operational by the end of 2024.

At the same time as we have been pushing for action on training, we’ve been behind the scenes creating a bigger series of demands with offshore oil and gas workers for a just transition. Through workshops in Aberdeen, telephone calls and a wider survey, offshore workers have come together to create a plan for a worker-led transition.

These workers hold the skills and experience that are vital to building a new, renewable energy system. However right now, many are leaving the energy industry altogether. Morale is low, pay is declining and job insecurity is increasing.

This will be one of the first transition plans built by workers directly involved in fossil fuel production anywhere – it will need support to be turned into reality. Keep an eye out in the new year to see the demands for transition created by offshore workers and what we can all do to make them happen!

We raised serious questions and highlighted community concerns following the announcement of the first round of awards from the Scottish Government’s £500 million Just Transition Fund for the North East and Moray.

This fund could be transformative for communities and truly green ideas but instead millions of pounds are going towards companies, many of which are backed by the fossil fuel industry. There are also millions going to a contentious project which will destroy a vital community greenspace of St. Fittick’s Park in Aberdeen.

The Scottish Government published the awards in October but has not yet provided information demonstrating the criteria used to determine successful applicants or what guarantees are in place to ensure there will be worker and community benefit in return for this public money.

There are smaller amounts of money made available for exciting community and worker-led projects like North East Rail. But if this fund is to have a lasting effect of driving a worker and community-led transition, future allocations must drive money into people’s hands to shape a zero carbon future, rather than becoming another cash pot for private sector led business groups.

With the first version of the Scottish Government’s Just Transition Commission coming to an end in 2021, a new Commission with a reformed membership and remit has been established. Unlike its predecessor, the current Commission is tasked with monitoring and evaluating progress across the economy as well as engaging with the people most likely to be affected by a shift away from fossil fuels.

Their first report, in July 2022, set out a far bolder vision for a just transition than we have seen from the Scottish Government. We joined our trade union allies in the Just Transition Partnership to welcome the report and urge the government to embrace it’s recommendation. These ranged from transformative investment in public transport, affordable clean energy available to all and a holistic approach to planning to our future industries and economy that prioritises tackling decarbonisation, cost of living and environmental issues.

In addition, the Commission went a step further by considering Scotland’s global role. They provided concrete recommendations for the Scottish Government to embed a ‘do no harm’ approach overseas in recognition of our relative wealth as a country and historic exploitation of fossil fuels and formerly colonised regions.

Their report doesn’t provide a complete picture for the future but it’s an exciting beginning to the new Commission which seems more eager to review progress and consider both the domestic and global challenges of the climate and energy crises. We will continue to monitor its work, feed in to its reviews and challenge the government to act when recommendations come in.

Read about our community campaigning for a just transition
Join Friends of the Earth Scotland
This site uses cookies to store information on your computer. To find out how we use them please view our Privacy Policy.Accept AllNo Thanks
Manage consent