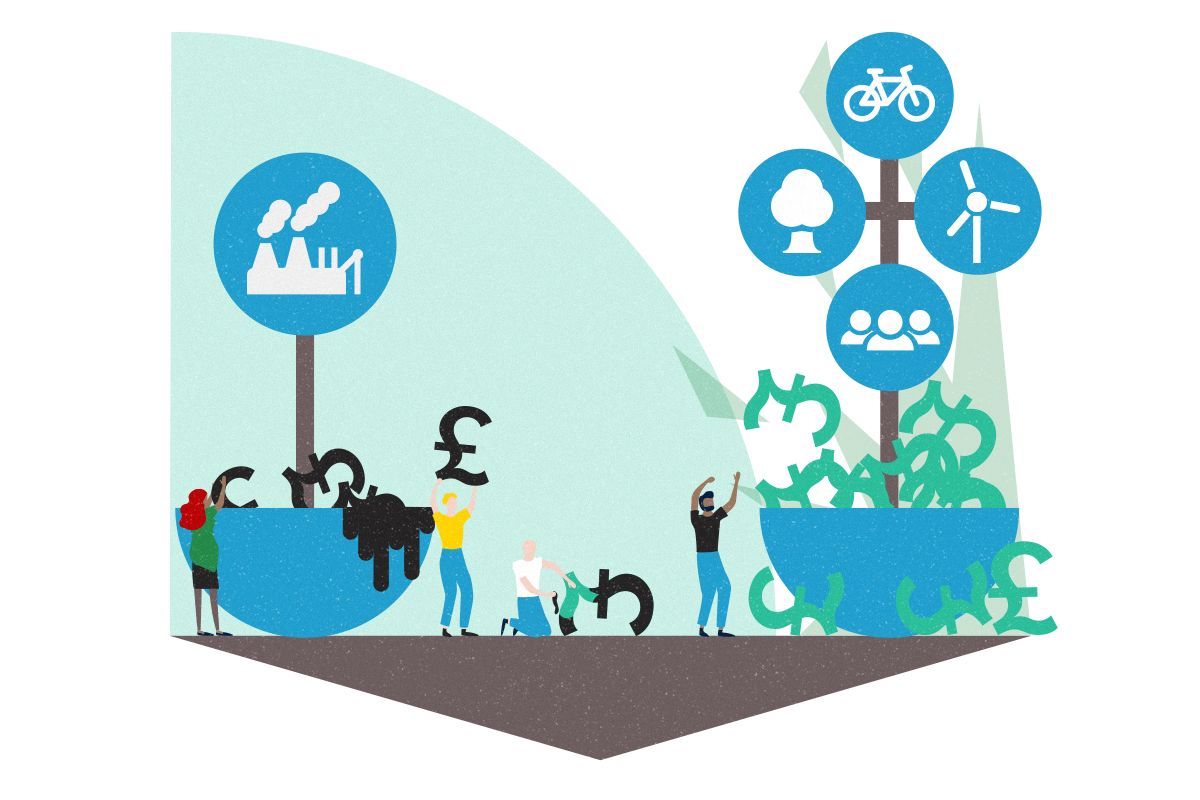 Scottish Government must now get down to work on Green Jobs

This is a longer piece than usual but we felt it important to give you our thoughts on some of these promises which could shape our society and environment for years to come.

The Scottish Government this week announced their Programme of Government for the coming year. Its decision to focus on green jobs was welcome, given the pressing need to tackle the twin economic and climate crises.

The employment and economic impact from coronavirus is worsening every day so we must see concrete steps in the coming months to turn these commitments into green jobs.

Long-term pledges such as those around energy efficiency jobs are really positive steps forward, but the Government should not wait until the next Parliament to make them a reality. Taking action now could help ensure that we have warmer homes, reductions in climate pollution and new jobs across the country.

What was the background to the Programme for Government (PfG)?

The PfG is the Government’s opportunity to lay out their plans for the next year in office before Parliament and the public. They are basically saying these are things we will accomplish and that you can judge us on these promises.

With Scottish Parliament elections due in May 2021 and the coronavirus crisis forcing the Government to bring forward announcements that in other years they may have saved for this big set-piece political occasion, this was a PfG like no other.

(And as if to put an exclamation on point on the unpredictability that we’re living through, the political plans were closely followed by an announcement of tightening of coronavirus restrictions on 800,000 people in and around Glasgow.)

What did we want from the Programme?

Friends of the Earth Scotland and over 80 other groups have long been pressing the Government for a recovery from this virus which creates a fairer and greener country. Together we’ve made the case for a recovery which protects those most vulnerable to the virus and its economic impact, that focuses on our collective wellbeing, with strong public services and a decent income for all.

The Programme for Government was the first major opportunity for the Government to set course on this bold and radical recovery path.

We have asked the Scottish Government to put the creation of good green jobs at the heart of their Programme for Government. Highlights of our proposals included a programme of public green job creation, a skills map to identify and provide the training needed for the zero-carbon economy, a review of public spending to shift budgets away from polluting projects and a ban on public money for fossil fuel developments.

Hundreds of people also emailed the First Minister to say that they wanted her to put Green Jobs at the heart of the Recovery Plan.

What were the green promises in the PFG?

As with any document coming in at over 130 pages in length, there was plenty we saw as positive, several areas of concern and, ironically, things we’d need to see more detail on before making a firm judgement.
Major environmental announcements included:

The eye-catching headline of 100,000 new jobs across the next decade risks being too reliant on a continuation of the same ‘market knows best’ approach that has so far failed to deliver for Scotland’s green economy. While the announcements did contain much-needed Government investment, they failed to set a course for decisive new economic model that prioritises people and planet.

For workers at bus manufacturer Alexander Dennis whose jobs are under threat or those underemployed at CS Wind, a commitment to create a £100million Green Jobs Fund over the next five years will be of little comfort. The First Minister spoke at length about the positives of green industry and opportunities available, but we need to see far more to turn that just transition rhetoric into reality.

Most notably, it is disappointing to see no mention of the Publicly Owned Energy Company, which could be a transformative force in the energy sector by advancing new renewable projects and heat networks across Scotland.

Despite transport being the most polluting part of Scottish life we are still not seeing the step change in how we move around, to reduce climate emissions and make our air safe to breathe.

The Low Emission Zones committed to in the 2017 Programme for Government have still not been introduced – instead it was confirmed that it will be 2022 before people feel their impact on air pollution.

With the growing evidence base on the links between air pollution and vulnerability to Covid-19, these delays become even more shocking. Pollution from traffic causes and exacerbates many of the heart and lung conditions that put people at heightened risk from the virus.

The Government must explain how the delay to the LEZs will be used to strengthen the schemes, including expanding the size of the zones and introducing higher emissions standards.

Support for Cycling and Walking

Everyone has welcomed the huge increase in people cycling that we witnessed throughout Covid-19. But we now need to build the safe cycle lane network that families need and will make these both temporary infrastructure and positive changes permanent.

Experts have shown that investment in walking and cycling can create up to 18,000 jobs as well bringing a huge boost to our health and wellbeing.

The £500m fund for bus prioritisation measures – such as bus lanes on motorways – announced this time last year has not been progressed. Instead there is a small £10m fund for temporary measures, and no mention of the remaining £490 million.

People will be asking why services are being cut across the country while the Scottish Government continues to hand over tens of millions of pounds to bus companies. The priority with public transport must be the safety of workers and passengers but we can’t continue bailing out bus companies that the public has no control over.

Bus passenger numbers were falling dramatically before Covid 19 hit.  Last year Councils were given the power to step in and run buses as the essential public service that they are. Now is the time for more public control of our buses.

The Circular Economy Bill planned this year has been delayed due to coronavirus. The Scottish Government must recommit itself to the work of that Bill which will reduce our vast overconsumption of natural resources and therefore cut climate pollution.

PFG announcements on increased charges for carrier bags and single-use disposable cups are a welcome step – ones that the public in Scotland overwhelmingly support. But it is not clear why the Scottish Government wants to re-run the consultation process on single-use cups, further delaying action that would reduce the estimated 200 million cups used each year.

In order to transform our attitude towards single-use products and truly tackle the plastic crisis, we need the Scottish Government to take more action on environmentally harming products including a full ban on single-use items under EU’s Single Use Plastic Directive.

Our new public bank should be using its £2 billion in capital to positively shape our economy for the future, turning away from a business-as-usual approach that has got us into this mess. The Bank should instead be prioritising people and planet, creating green jobs in the shift to a zero-carbon economy. The First Minister’s hints about early lending candidates including zero carbon public transport sounded very promising.

The bad news was the Government announced another £5million for Carbon Capture Challenge Fund. Carbon Capture and Storage is a risky and expensive technology that locks us into fossil fuels and distracts from climate solutions that we know work. The Scottish Government must stop throwing money at the fossil fuel companies who are speeding us towards climate breakdown.

Similarly, the Scottish Government must not be fooled by the false solutions and false promises of the fossil fuel industry who are demanding public money for similar high risk technologies like fossil-fuelled hydrogen.

Building an entire new hydrogen network in Scotland would support continuing fossil fuel use. The Scottish Government should focus on improving accessible, affordable public transport networks and domestic heating powered by renewable electricity – not by new fuels made from fossil fuels.

As you can see, there was plenty to feel positive about in the Scottish Government’s focus and language but the proof will be in the changes we see and the actual jobs created.

Will the Government let the free market choose where and how these green jobs are created, or will it have the courage to seize this moment and plot a clear course to a new fairer economy that transitions away from fossil fuels?

Later this year, we expect important announcements such as the Scottish Budget, the Climate Change Plan, the Energy Strategy and Infrastructure Investment Plan which will be moments for the Government to show which path it wants to put us on.

We’ll be working hard to build public support for our ideas and get them in front of Ministers and in the media. With the elections just around the corner will be pushing all the parties to ensure that their manifestos promise the action needed in the years to come.

We’ll need your help to keep on pushing for a recovery from coronavirus that delivers good green jobs, a fairer society and lives up to our commitments on climate change. We hope that you will continue to stand alongside us.

You can support our work with a regular donation

Become a member now
This site uses cookies to store information on your computer. To find out how we use them please view our Privacy Policy.Accept AllNo Thanks
Manage consent