Young people and climate action in 2021

2021 was maybe the biggest year ever for the Scottish climate movement. Despite the backdrop of a still raging pandemic and increasing inequality, young people from the YFoES network kept up the fight for climate justice, from COP26 to stopping Cambo. In fact we achieved so much this year I almost couldn’t fit it into one blog, so strap in for this roundup!

Our year started with thinking about the Scottish parliament elections in spring. We knew this was a crucial opportunity to push climate action up the agenda and make our voices heard, so we linked up with Fridays for Future Scotland and Teach the Future to launch the #Vote4Climate campaign.

We encouraged hundreds of young people to register to vote and pledge to cast their ballot with climate in mind, as well as creating educational resources on key climate issues, voter registration and understanding Scottish elections.

We also linked up with six other youth groups to create the Climate Hot Seat, a youth climate hustings which gave young people the chance to grill party leaders on climate action. This was kicked off with a warm up event which offered expert opinions on climate issues and helped young people to form questions for party leaders.

All major party leaders attended the hustings, including Nicola Sturgeon, where they were grilled on issues of youth engagement, phasing out fossil fuels and more, and we saw pledges to ban single use plastics and integrate climate education into school subjects.

Fighting for a just end to oil and gas

2021 has also been the year the tide has begun to turn on the oil and gas industry, with the Stop Cambo campaign at the forefront. We got involved in the fight against this new North Sea oil field from the start, helping to organise actions outside the UK Government building in Edinburgh, against the Shell CEO, a virtual phone jamming and meme making action and more, as well as running workshops and outreach to engage more people in the campaign.


The news that Shell pulled out of Cambo, shortly followed by the announcement of Siccar Point pausing the project, was an incredible moment – people power did that!

The transition away from fossil fuels needs to be fair to workers and communities that currently rely on these industries, so for us this fight is firmly part of the broader struggle for a just transition. We continued conversations and learning around climate justice, workers rights and energy transition during 2021 through workshops, education and our podcast Decent Jobs on a Living Planet.

For the past two years, everything has been building up to the UN Climate Conference and in November COP26 finally landed in Glasgow. The COP26 negotiations were the most exclusionary ever, and failed to deliver the climate justice we need. However, we never really expected them to.

At YFoES, we saw COP26 as an opportunity to build our grassroots movement, engaging new people and pushing for change here in Scotland. We teamed up with UKYCC and Glasgow University Environmental Sustainability Team to create the COP26 Youth Hub – a base for young people during the two weeks of COP.

The Hub saw over 500 young people through the doors engaging with climate justice, skills, knowledge and action (and more digitally!)

We had sessions on greenwash, campaigning, eco anxiety, the Stop Cambo campaign, sustainable travel, agriculture, podcasting, disability justice and way more. There were conversations between young people from all over the world, signs painted, plants swapped, actions planned, and lots of snacks consumed.

We did what we aimed to do, which is create a chill and positive space amongst all the chaos of COP which offered support to the youth climate movement and helped engage lots of new people with climate action.

Everywhere you looked during COP26, young people from across the world were leading the charge, taking action and holding leaders to account. YFoES hit the streets to make our voices heard for climate justice, joining the Fridays for Future climate strike and marching with over 150,000 others on the streets of Glasgow for the Global Day of Action. We helped out with actions that kept pushing Cambo up the agenda, making it an inescapable topic for decision makers – a key part of the success of the campaign.

Building a stronger movement for justice

One of the best outcomes of COP26 was the relationships built between the climate movement and other struggles. We were proud to stand alongside striking cleansing and transport workers on the picket lines in Glasgow, and to march alongside trade unions at the climate strike.

We joined unions on the picket lines because workers deserve good pay and conditions for the essential work they do, and we know we cannot achieve climate justice without worker justice. We hope to see more of the climate movement listening and standing with workers in the fight for good green jobs and against capitalist exploitation.

Throughout the year our Access and Inclusion Working Group continued their work on minimising the barriers to getting involved with YFoES, as well as creating movement-wide resources, developing a workshop on access, inclusion and climate justice (which we’re open to running for anyone – get in touch!) and feeding into discussions of ableism in the climate movement. We also continued to learn and draw links between climate justice and other struggles such as LGBTQ+ liberation, migrant justice and housing rights.

As always, a key focus of our work this year was sharing skills and learning together. We ran trainings on campaign skills, media strategy, effective climate communication, facilitation and more.

In April we pulled together another successful online skillshare on the theme of rest and resistance, with the aim of countering activism burnout, understanding capitalism as a root cause, and increasing resilience for the year ahead. This included an offline afternoon of regenerative activism with activities that could be done collectively but across distance – check out the resource we created.

We’re looking forward to building on the momentum of COP26, continuing linking with other struggles and carrying on the fight for climate justice – but not before a well earned rest.

World leaders may have let us down this year, but we know real change will come from the ground up, and young people have been building our movement and our power. Watch this space! 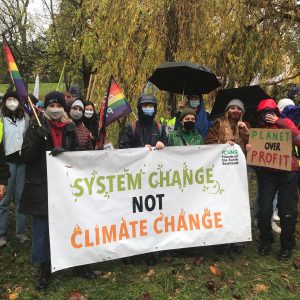