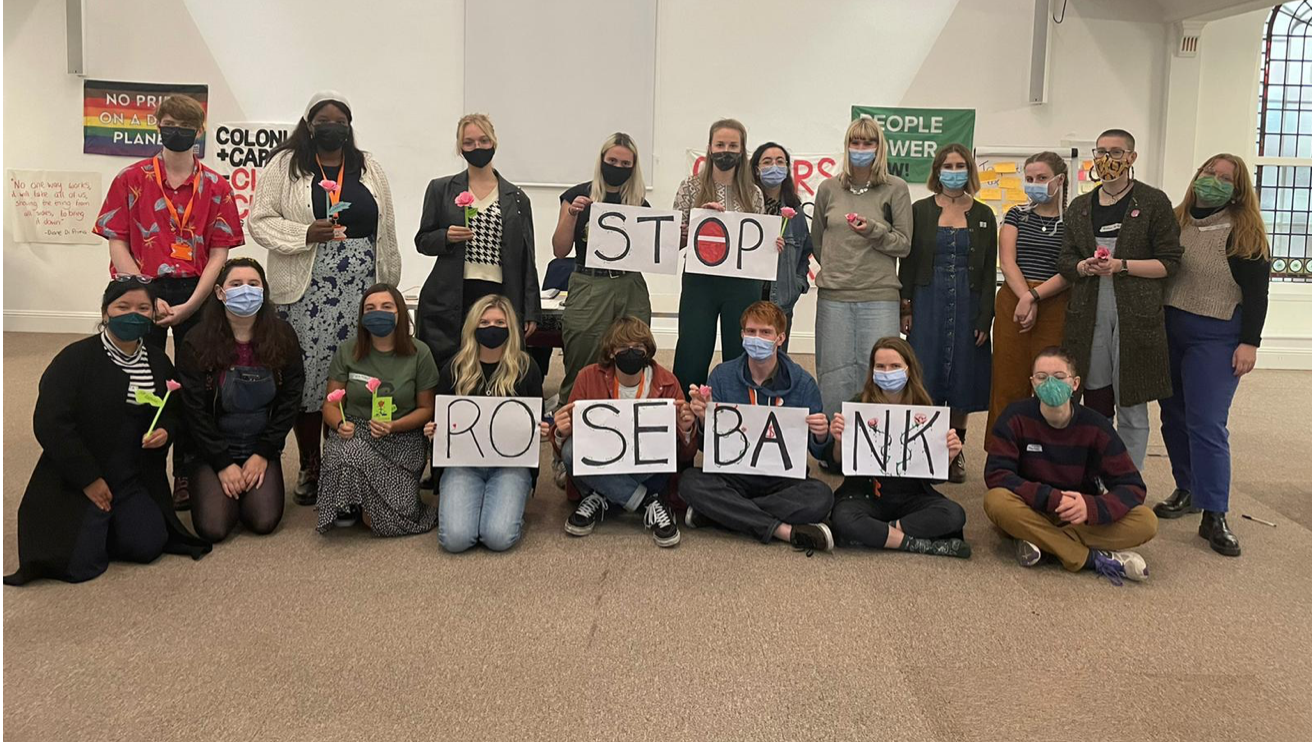 As 2022 draws to a close, Young Friends of the Earth Scotland network coordinator Catrina reflects on another year of activities.

2022 has been a year of regrouping and working out new ways forward for the youth climate movement. COP26 in November 2021 was a huge moment for us all last year and saw a massive explosion of interest in climate action. However, the aftermath also saw many young people burnt out and in need of time to recharge. 2022 has been about trying to find the balance between action, learning, fun and wellbeing.

We have also been slowly returning to some of our pre-covid activities with more in-person events and activities. Again we’ve been trying to find the balance and attempting to make sure accessibility and inclusion is still centred in what we do. It has been a joy getting to spend more time together and getting creative to ensure we are still meeting as many needs as possible. We are still working out the best ways to do this, but are committed to continually learning.

Continuing the fight against fossil fuels

We know there can be no new oil and gas for any hope of a livable planet and the cost of living crisis this year has further emphasised our need for clean affordable energy. After the win on the Cambo oil field a year ago in 2021, the fight against new North Sea oil and gas continued. We continued our work with the Stop Cambo coalition, fighting against the Jackdaw gas field and the Rosebank oil field.

We’ve been out spreading the world and building support by flyering, stickering, running stalls, taking our giant jackdaw out during the Edinburgh fringe, making hundreds of paper roses to give to key stakeholders, helping organise stunts and demos – including bringing the Stop Rosebank campaign to the COP27 march in Edinburgh.

We’re ending this year with the great news that the Rosebank oil field has been delayed, with the regulator seeking more information on its environmental impacts. This gives us more time to keep fighting in 2023.

After joining the picket lines at COP26 we were determined to learn more about the links between climate justice and workers rights. We wanted to keep showing solidarity with unions and workers.

We teamed up with the Scottish Trade Union Congress youth committee, Better Than Zero and Fridays for Future to organise a day of learning from one another about climate justice, workers rights and how we can better work together. Through this we learned that our struggles are deeply interlinked, and realised there isn’t actually a real divide between the climate movement and young workers – we’re often the same people! We’re in the process of creating more resources to share our learning.

We continued to show our support for striking workers on the picket lines, mobilising people from other groups to show their solidarity as well. We joined May Day marches in Edinburgh and Glasgow, and made sure just transition was highlighted at the cost of living march with banner painting workshops and a climate bloc.

In November we continued our learning and discussions on just transition in Aberdeen with a short film screening and discussion about the future of oil in the NE. We’re really keen to continue building community in this area – get in touch to join our Aberdeen youth climate chat!

This year we kept the pressure on decision makers, making sure that climate was kept high on the agenda.

During the local council elections we encouraged young people to register to vote and #Vote4Climate. We created resources on parties’ climate and environmental policies to help people make informed decisions on who they would like to vote for.

We took part in a Scottish Government consultations on just transition and new incinerator bans (which successfully led to the Scottish government announcing a ban) and put pressure on decision makers over environmental housing standards and waste systems.

In 2022 we continued building links and sharing skills across the movement. From climate strikes to the picket lines, we stood in solidarity with people fighting for change across our society.

In September we teamed up with Youth in Resistance, People & Planet and Fridays for Future to run the Edinburgh Youth Activist Gathering, bringing together over 50 young people organising for change across Edinburgh to share knowledge and skills on campaigning, facilitation, anti-racism, just transition, workers rights and more.

We also ran workshops and sessions throughout the year on climate justice, access and inclusion, running good meetings, climate anxiety and more. (Is your group looking for workshops? Get in touch!)

Our new steering group has already started making plans for 2023. This month we came together for a mini network gathering in Glasgow and have made plans for relaunching our local groups network in 2023. Watch this space!

Aged 16-30 and passionate about climate and social justice? Join Young Friends of the Earth Scotland! Get in touch via social media @yfoes or email the steering group at yfoescotland@gmail.com or the network coordinator at crandall@foe.scot.