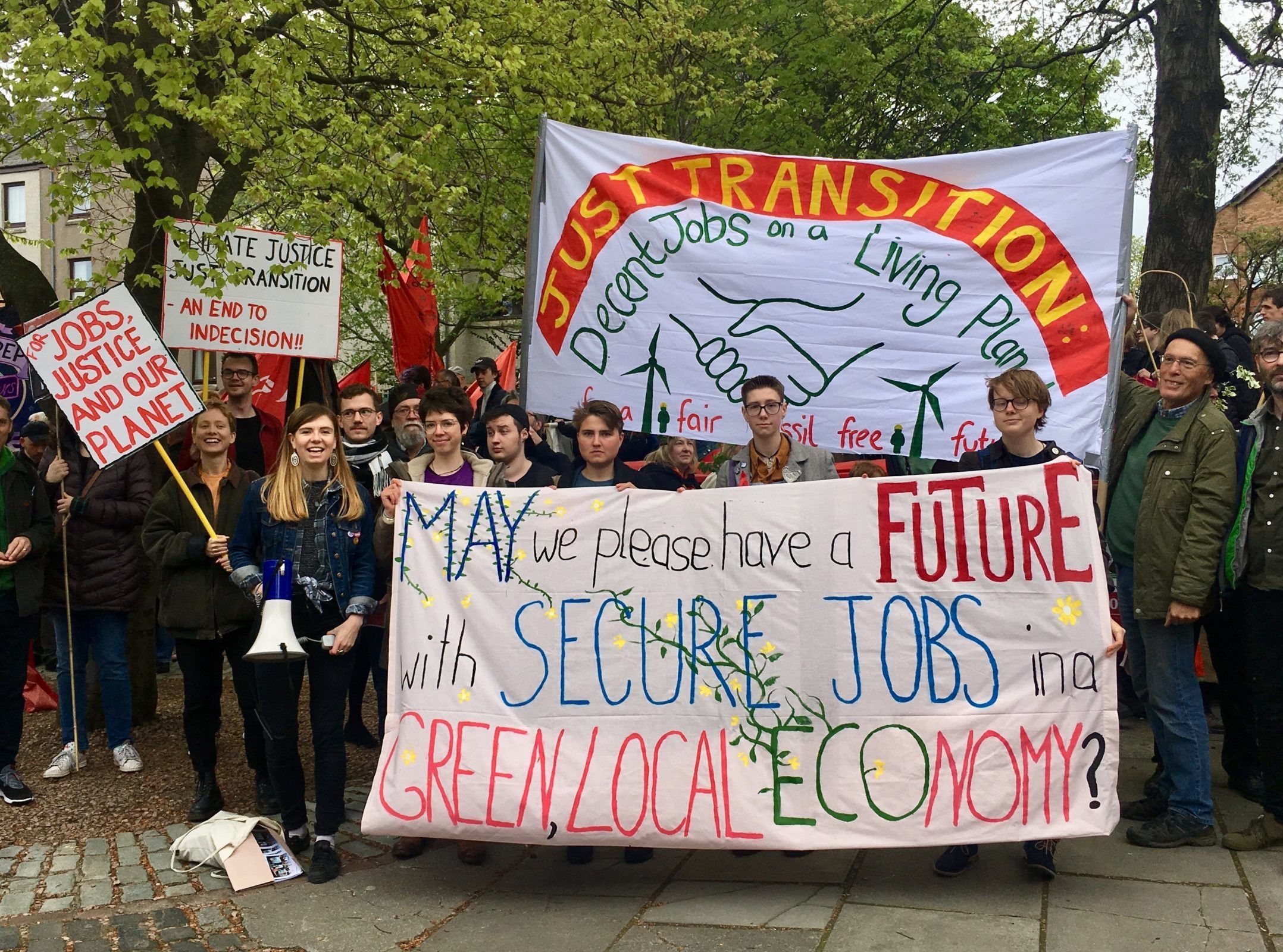 Working alongside Scotland’s growing, exciting climate movement.
Getting moving on polluting traffic
Making progress on plastic and waste
Making the case for a jobs-rich just transition
Young FoES goes from strength to strength.
An end to fracking?

2019 was a momentous year for climate campaigning. The energy of youth climate strikes and street protests culminated in tens of thousands of people in Scotland joining the millions in the Global Climate Strike on Friday September 20th. The announcement that the UN Climate Talks will come to Glasgow in 2020 further galvanised this exciting and powerful movement.

We witnessed growing political and public support for an end to fossil fuel investments, and outrage about plastic being turned into tangible action and the ideas of a just transition became part of the political discussion. In Parliament, the long-running Climate Bill was finally concluded, along with a Transport Bill that will help shape our transport choices for the coming years.

The highlights below are just a small selection of the amazing people-powered action from this year. We’ve also linked up with European allies, supported action to transform grouse moors, hosted webinars, revealed a bus scandal, secured a fracking ban, Ceilidh-ed, gained new members of the team, hosted a Summer Weekender and taken part in the UN climate talks in Madrid.

The renewed energy around activism, heightened media focus on the climate emergency and the support of our members will help ensure that we achieve more in 2020!

When we began campaigning on the Climate Change Bill back in 2017, the Scottish Government felt able to ignore the voices of the 19,000 people who had responded to their consultation telling them to do more. But over the past year we’ve seen the climate movement grow significantly, with thousands upon thousands of new people getting involved in campaigning.

FoES has worked to support the growing movement, to build links with the new groups and to bring that public pressure into the Government and Parliament. On the day of the final vote on the Climate Act it was great to take action outside the Scottish Parliament together with both seasoned and new activists, including Extinction Rebellion Scotland and the Scottish Youth Climate Strikers.

Now, we are harder to ignore. It was people power that, at the very last moment, pushed the Scottish Government to vote in favour of a stronger 2030 target – one they had spent months pushing back against.

In the year ahead, we’ll continue to work with the movement as we put pressure on the Government to deliver those tougher targets and as we build up to the UN climate talks coming to Glasgow in November 2020.

Getting moving on polluting traffic

In October, MSPs passed legislation which could deliver positive changes for air quality, climate emissions and for the ways we move around. The new Transport Act contains a wide range of powers for councils, including the power to establish a low emission zone, the ability to franchise or even own local bus services, and to establish a workplace parking levy. We worked successfully with trade unions and grassroots campaigners to build political support for the vital changes to how buses could be run.

Whilst the workplace parking levy was the most controversial, and misrepresented, piece of this legislation, it will allow local authorities to charge large employers per parking space, and invest this money in greener transport measures, like more buses and cycle lanes.

To reduce toxic air pollution and climate emissions from transport, councils will need to use a variety of these tools over the next few years. Taken together, these new powers could help change our local transport systems, deprioritising cars and investing in public transport.

With your help in 2020, we’ll keep pushing councils to get a move on and use the powers appropriate to their area to quickly move away from fossil fuel car use, and towards sustainable transport.

2019 witnessed the launch of a great initiative in Edinburgh. On the first Sunday of every month, Edinburgh’s Royal Mile is closed to all traffic, and open to all people on foot, bike and buggy. This ‘Open Streets’ project has been a great success. It shows us how much public space we give to traffic all year round, and what is possible if we take some of it back.

In the next ten years, to meet the climate targets enshrined in this year’s Climate Act, we will need to make big changes in our transport system, especially in our towns and cities. We’ll be pushing local authorities, especially our city councils, to follow Edinburgh’s lead and go further. To prepare for car-free cities, car-free days need to become a common occurrence and, ideally, cover larger areas than just one road. But ‘Open Streets’ is a great first step.

Episode 2 of #OpenStreets in Edinburgh. This one with #CleanAirDay stall + a hula-hoop workshop led by air pollution campaigner extraordinaire, @Emiliajaneagain. pic.twitter.com/vgLCM2iuvc

Making progress on plastic and waste

This year saw the Scottish Government tackle some environmentally harming single-use products in response to rising public concern about plastic. Scotland became the first country in the UK to ban plastic stemmed cotton buds and, in October, they announced plans to introduce a ‘latte levy’ – a charge on single use disposable cups.

The Scottish Government also progressed their plans for a Deposit Return Scheme that will include glass bottles, plastic bottles, aluminium and steel drink cans. We’ve been pushing for the scheme to also include other materials such as HDPE (e.g. milk containers) and cartons, and to make sure it is not delayed by waiting for a not yet certain UK-wide scheme.

The Scottish Government has also announced plans for a Circular Economy Bill. Their proposals included lots of welcome ideas including charges for environmentally harming products, mandatory reporting on waste and work to increase recycling rates. But in order to tackle the climate emergency, we need this Bill to include robust targets to tackle our overconsumption of resources.

Over 1200 people responded online to the public consultation so far to make this important point. We held events with local activists to engage them with the proposals for a Circular Economy for Scotland.

We’ll be involved with the Bill in 2020 as it progresses through Parliament and with your help we can push for those targets so we can reduce our huge over-consumption of the planet’s resources.

Making the case for a jobs-rich and just transition

In May, we released our ground-breaking ‘Sea Change’ report, which revealed the devastating climate impact of North Sea oil and gas extraction and urged governments to prioritise a job-creating energy transition.

The report sets out how Governments, with the right policies, could overhaul our economy to meet climate targets while providing decent work in Scotland for those currently working on fossil fuel projects and many more. This would be a hugely important shift for our workforce with more public investment ensuring the long term social benefits are shared across communities.

We spoke to people around the country about this report, going to political party conferences and to public events in Glasgow and Biggar. Keep an eye out for more events like this in 2020.

This year, the workers of BiFab in Fife were told they wouldn’t be receiving any of the manufacturing work from 53 turbine jackets for an offshore wind farm to be placed just ten miles off the Fife coast. Instead, EDF Energy had decided to send the work to Indonesia and ship the jackets two at a time back to Scotland. This was just another example of a failure of the renewables economy to deliver its full potential of decent work in the supply chain.

But the workers of BiFab weren’t prepared to watch on and instead formed a powerful campaign, Ready for Renewal, to demand EDF reverse its decision. We stood with the workers of BiFab and the Ready for Renewal campaign alongside trade unions and the wider community in support. The campaign included public meetings in Burntisland, the delivery of a letter to EDF’s office in Edinburgh (posted through their locked doors) and a rally in Kirkcaldy town centre. EDF eventually moved, with a potential 8 of the 53 jackets being built at BiFab, but this is still nowhere near good enough.

We will continue to stand with the BiFab workers and others who should be seeing more of the benefits of our renewable economy across the country but Ready for Renewal was a powerful campaign in 2019, with workers, communities, trade unions, climate strikers and ourselves standing in solidarity.

Young people have been leading environmental campaigns across the world in 2019. Young Friends of the Earth Scotland have continued to grow, getting involved in a wide range of social and environmental issues. They have also been at the heart of climate campaigning – providing wellbeing stalls, march stewards and of course taking to the streets in support of the incredible Scottish Youth Climate Strikes in September.

They’ve led by example in working with and learning from our European neighbours to build an intersectional approach to these issues, returning to share this knowledge at home. They collaborated with YFoE Norway for training in Aberdeen on the theme of just transition with sessions led by trade union reps, oil industry experts, activists and many others. These conversations about climate justice, workers rights, the economy, and how to protect workers and communities are vital as we move our countries away from fossil fuels.

An end to fracking ?

In a victory for local campaigners across Scotland and FoE the Scottish Government finally announced a firm policy ban on fracking. This was the result of eight years of campaigning for us. We had commissioned a legal opinion to try to make this a more secure ban in legislation but fracking is certainly dead in Scotland for now.

Of course, we are crossing our fingers that arch-fracking-enthusiasts INEOS do not take the government to court to try to overturn the ban.

The highlights above are just a small selection of the fantastic people-powered action from this year. We’ve also linked up with European allies, supported action to transform grouse moors, hosted webinars, revealed a dirty bus scandal, Ceilidh-ed, improved the new National Investment Bank, gained new members of the team, hosted a Summer Weekender and went to the UN climate talks in Madrid.

Thanks for making so many of these successes possible through your hard work, energy, willingness to talk to decision makers and getting your friends involved. With the UN Climate Talks coming to Glasgow in 2020, it promises to be our biggest and most exciting year ever. We’ll need your help to achieve even more in the next 12 months.

Can you become a member and support our work with a regular donation?

Yes, I want to join