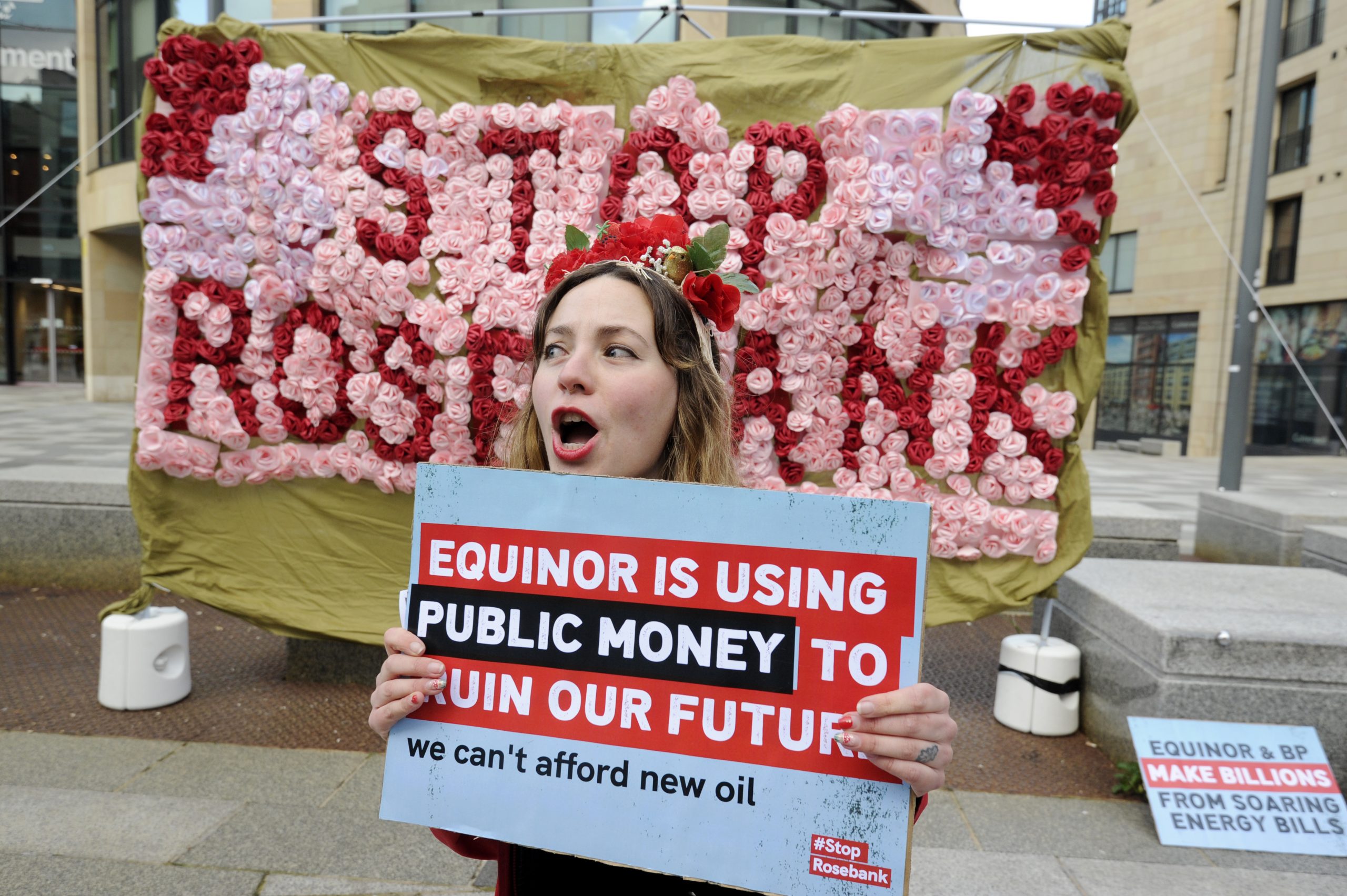 2021 was a year of historic moments for the campaign to end fossil fuel extraction. The Beyond Oil and Gas Alliance of countries was formed, the Scottish Government announced that they would no longer support unlimited extraction of oil and gas from the North Sea, and the controversial Cambo oil field was put on indefinite pause by a hugely successful, people powered campaign.

In 2022 we have been working to keep up this momentum and build on these successes, while highlighting where there is still more work to be done and promises still to be fulfilled. The skyrocketing price of energy, which has driven the cost of living crisis, has exposed the inherent volatility of fossil fuels. Meanwhile anger at oil company profits has continued to rise.

Reliance on oil and gas has left millions vulnerable to spikes in their prices, making the case for a clean, reliable renewable energy system even more appealing. Here’s what we’ve been doing to make this a reality.

Despite the harm caused by fossil fuels, the UK Government has doubled down on their plans to expand oil and gas since the invasion of Ukraine. This is in spite of their advisors at the Climate Change Committee (CCC) making clear that new fossil fuels would not help people with their bills. In a big step forward the CCC also supported a tighter limit on production and a ‘presumption against’ exploring for new oil and gas.

The first big effort this year to stop new projects before they were approved was with the Jackdaw gas field. Jackdaw is owned by Shell and would produce the equivalent of half the annual emissions of Scotland if all its gas is burned.

We quickly raised the profile of the Jackdaw gas field through media and protests. 80,000 people signed a petition calling on the UK government to reject the plans for Jackdaw, which was handed in to Downing Street in August. Monica Lennon MSP also lodged a motion opposing Jackdaw in the Scottish Parliament which drew support from several other MSPs.

Campaigners also did a lot of outreach about the campaign during the Edinburgh Fringe as part of a UK-wide week of action, with flyering outside shows, shoutouts from performers, and a trip around Edinburgh with a giant Jackdaw!

The Jackdaw gas field was ultimately approved by the UK Government regulator, however a legal challenge against the field lodged by Greenpeace is still ongoing.

Teaming up with allies to Stop Rosebank

In August, the Norwegian oil company Equinor submitted plans for the Rosebank oil field to the UK Government for approval. Rosebank is the biggest undeveloped oil field in the North Sea and would produce the same amount of pollution as the annual emissions of 28 low-income countries combined.

For this campaign we have teamed up with partners in Norway and across the world who are working to expose the truth of Equinor’s climate-wrecking plans. We held a digital day of action targeting Equinor’s social media accounts, phone lines and google reviews, and have protested outside their offices in Aberdeen and London.

We have also launched a petition and gained support from MPs and MSPs, including a motion in the Scottish Parliament and many questions asked about the project in parliament.

We hosted ‘How to Stop an Oil Field’ public meetings in Edinburgh and Glasgow, where activists made plans (and paper roses) to expose the toxic relationships that are propping up the Rosebank project.

Groups of activists took bunches of these oily roses to different locations in Edinburgh and Glasgow, like Bute House (Nicola Sturgeon’s residence), Glasgow City Council (as their pension fund invests in Equinor) and Barclays Bank (which has provided Equinor with $2.46 billion in corporate financing since 2015).

Keeping climate action on the agenda

As part of the Global Day of Action during the UN climate talks COP27, thousands of people marched through the streets of Edinburgh to call for urgent climate action. One of the stops along the march route was at the UK Government building, where we called on them to reject Rosebank and stop all new oil and gas extraction.

We will keep the pressure on to encourage the Scottish Government to publicly and explicitly oppose Rosebank, which would be a major setback for Equinor and its investors. You can add to this pressure by writing to your MSPs by clicking on the link below.

The latest update from the Stop Rosebank campaign is that the UK Government regulator, has asked for clarification on several aspects of Equinor’s Environmental Statement accompanying their development plans. They have asked for evidence that Rosebank will fit in with the UK Government’s Net Zero target as well as the North Sea Transition Deal.

This is good news for the campaign as it will delay any further decisions on Rosebank until these questions are answered, allowing the campaign to grow and mobilise even more people against continued fossil fuel extraction in the North Sea. However, the UK Government must reject Equinor’s plans for Rosebank outright, as they already have all the evidence they need to know that new oil and gas extraction is incompatible with the target of 1.5ºC of warming.

Last year, the Scottish Government made a historic shift in its attitude towards oil and gas extraction, ending its support for the policy known as ‘Maximum Economic Recovery’ of oil and gas in the North Sea. This was the first time they had indicated any intention other than to back the industry desire to drill for every last drop of oil and gas.

Now, it’s essential that it formalises this commitment in its policy. The Scottish Government’s new Energy Strategy and Just Transition Plan is due to come out in the next few months, so we have been working to make sure that this commitment to phase out oil and gas is front and centre in that strategy.

It is crystal clear that our current energy system is harmful to people and the planet. Oil companies are declaring billions of profits each month and dishing out huge bonuses to bosses and shareholders. Meanwhile, pollution from the same oil and gas is driving the increase in extreme weather we are witnessing around the world. This has to change.

As part of making this case to decision makers, we hosted a fringe event at the SNP conference on what is needed to make a fossil fuel free Scotland a reality. Campaigners from Friends of the Earth Scotland were joined by SNP MP Tommy Shepherd and retrofitting expert Matthew Clubb, to discuss the urgency of the need to phase out fossil fuels and reduce energy demand without relying on oil and gas industry cons such as carbon capture and hydrogen.

More and more people are personally experiencing the harm caused by fossil fuels – either in their fear of turning on their home heating, or feeling the impacts of the climate crisis. In 2023 we will continue to build the people-powered movement we need to stop the fossil fuel giants who are endangering us all. Join us to be a part of that movement.

Become a member of Friends of the Earth Scotland
This site uses cookies to store information on your computer. To find out how we use them please view our Privacy Policy.Accept AllNo Thanks
Manage consent