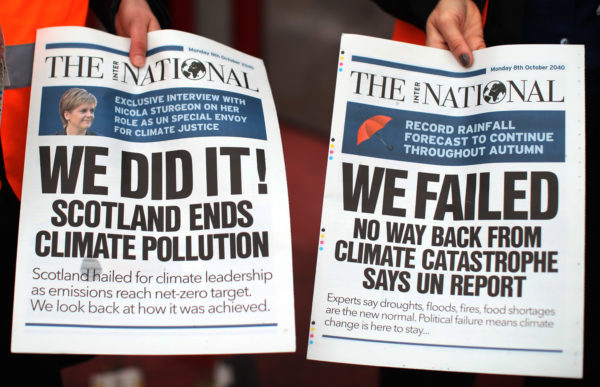 We went to SNP conference with climate messages from the future.
Intervened in the court case to fight for Scotland’s fracking ban
Built support for fossil fuel divestment
Took over parking spaces to highlight better ways of using Edinburgh’s public space
Joined the Revive coalition to transform our Grouse Moors

2018 was another action-packed year for our work to protect Scotland’s environment. We kept the pressure on the Scottish Government to do more to tackle climate change right now, worked with Councils to cut air pollution and built support for ending fossil fuel investments. We took on plastics, joined a ground-breaking coalition and steadily advanced the case for a legal ban on fracking.

These are just a selection of our highlights from the year but they show the breadth and impact of our work with volunteers, local groups, allies and committed politicians. Thanks to everyone who was part of it in 2018 and we look forward to achieving even more in 2019!

We went to SNP conference with climate messages from the future.

On the day the landmark warning from the UN Intergovernmental Panel on Climate Change (IPCC) was delivered, we went to the SNP Conference to demand greater climate action here in Scotland.

The IPCC report, compiled by hundreds of the world’s top climate scientists, spells out the need for wholesale transformation across energy, transport and food systems if we are to tackle the climate crisis.

We called on the SNP to heed this warning and strengthen the Climate Change Bill currently going through Parliament to urgently increase Scottish action over the next decade.

To help us spread our message, we created a newspaper from 2040 showing two different climate futures for Scotland. One version showed a healthier, happier country where people had benefited from ambitious climate action. It told stories of improved public transport, a boom in clean renewable energy and better relationship with nature.

The other vision described a world where governments had failed to do enough leading to food shortages, increased energy prices, transport chaos and widespread climate breakdown. This is the path we’re currently on, but we have the chance to change.

2018 also saw lots of fantastic climate activism locally across Scotland. From Dumfries to Aberdeen and Inverness, we met hundreds of people at campaigner workshops throughout the summer, and teamed up with Take One Action film festival to take our campaign into cinemas up and down the country.

We helped thousands to email their MSPs urging them to act on climate, and joined FoE colleagues from around the world at the UN climate conference in Poland. Our local groups go from strength to strength too, meeting their MSPs about climate change and running events while the Edinburgh group organised a hundreds strong climate rally in December!

Our excellent climate campaigning this year also helped turn SNP support for expansion of Heathrow into an abstention on the final vote, challenged the green-lighting of oil and gas developments in the North Sea and highlighted the climate impacts people are already facing around the world.

When petrochemical giant Ineos took the Scottish Government to court against its ‘effective ban’ on fracking, we intervened in the case. The eventual ruling from the Court of Session saw INEOS lose its judicial review in what was a welcome defeat for the aspiring frackers.

Years of campaigning had pushed the Scottish Government to initially put a moratorium on fracking in 2015. Then came a public consultation beginning in early 2017 which returned a 99% rejection of the industry. The Energy Minister’s announcement of an ‘effective’ and ‘indefinite’ ban in October 2017 was welcomed across Scotland. This was the decision that the petrochemical giant INEOS wished to challenge.

We made a public interest intervention in the case, arguing that the Scottish Government was obliged to ban fracking in order to meet its own legally binding climate change commitments. We were able to intervene thanks in part to our generous supporters who donated to fund our challenge.

In a headline grabbing ruling, the judges agreed with the Scottish Government’s argument that as there was technically no legally enforceable ban in place, there was no case to answer, therefore INEOS’ petition was thrown out.

The decision has piled the pressure on the Scottish Government to act swiftly and legislate to ban fracking. Ministers are carrying out further technical consultations, and have indicated they will come to a final decision in the first quarter of 2019. We are urging Nicola Sturgeon to be true to her word and commit to a full legal ban. Only a legislative approach can ensure a robust, enforceable ban on fracking. The Scottish Government has the power to pass a law banning fracking, and a clear mandate from the people of Scotland to do so.

Our intervention in the case was the first to be granted permission in the area of environmental law. While ultimately the case was decided on a technicality, Lord Pentland commented on our ‘very helpful’ intervention from the bench. Cases like this highlight the very real need for reform of the civil justice system and the establishment of a specialist environmental court that can look into the merits of cases, as environmental problems such as climate change become ever more pressing and the legal and scientific issues around them ever more complex.

Over 1,000 institutions or groups have now chosen to take their money out of fossil fuel companies in response to the climate crisis. As cities like New York have divested, the global divestment campaign has gone from strength to strength, with major oil companies even expressing concern about the impact of this movement on their business.

In Scotland, 2018 saw the long-awaited victory for the University of Edinburgh campaign. For five years students, staff and alumni had pushed the University to end their financial relationship with the firms driving climate change. The campaign saw occupations, marches, petitions and threats to withhold individual donations to the University.

Pressure on politicians to end public investments in fossil fuels also rose this year. Over 200 MPs – including over half of Scottish MPs – have called for the Westminster Pension Fund to act. In the Scottish capital Lord Provost Frank Ross joined a group of 15 Councillors opposing investments in coal, oil and gas companies held through local government pension funds.

Action in city halls was spurred by our investigation showing that Scotland’s councils had £972 million of pension fund money invested in companies carrying out fracking overseas – a practice that isn’t permitted in Scotland.

Next year could be the year Scotland gets serious about funding a fossil free economy. Parliament will be deliberating a Bill to create a Scottish National Investment Bank, and we need MSPs to insist it focuses on climate jobs and not fossil fuels. They could also take steps to clean up their own pension fund. In 2018 Ireland became the first country to make a national commitment to divest – could 2019 be Scotland’s fossil free year?

We organised our first Pop Up Park in Edinburgh in June which took over parking spaces and showed what it our cities could be like if they were designed for people, not just vehicles.

This took place just ahead of Clean Air Day and highlighted the dominance of the car in our urban space. Edinburgh, Glasgow, Dundee, Aberdeen and Perth all have illegal levels of air pollution that endangers health and traffic is the key culprit.

Cars take up way too much space in our urban areas. They cause pollution, congestion, and can make us feel unsafe to walk or cycle in some areas, creating social stagnation

Thankfully Edinburgh City Council is beginning to think about they shift the balance back towards people in their transport plans. In September, they consulted on radical proposals which included Low Emission Zones, car-free days and a boost for walking and cycling.

Hundreds of people spoke up and backed their plans, sharing their vision for clear air both in Edinburgh and their hometowns.

A key element of the transition to cleaner, healthier transport is having affordable, reliable public transport. Edinburgh’s bus system is reliable, well liked, and comparatively cheap but other cities and rural areas are suffering from years of deteriorating bus services.

The private companies running these routes are cherry picking the best routes leaving many stranded, jacking up the prices and dragging their feet on upgrading to newer cleaner models. This is why we’ve been supporting calls for buses to be brought back into public control so they are run in the public interest rather than just for private profit.

We’re working with Get Glasgow Moving and others to ensure that the Transport Bill going through Parliament in 2019 includes an option to put buses into public hands.

Joined the Revive coalition to transform our Grouse Moors

We joined the ground-breaking Revive coalition which sees social, environmental and animal welfare organisations working together for real reform of Scotland’s grouse moors. The campaign was launched in Edinburgh in November at an event with wildlife broadcaster Chris Packham.

Right now, almost 20% of Scotland’s land is being used for the elite bloodsport of shooting grouse. This industry brings enormous destruction to swathes of land used solely for intensive breeding of grouse, who are then shot in huge numbers.

Foxes, hares, weasels are often killed, snared or poisoned to remove any natural competition for the grouse. The countryside is indiscriminately doused with grouse medicine, polluted with lead from guns and scarred with hilltracks to make it easier for 4x4s to bring groups of shooters.

All of this harm is in addition to the illegal killing of golden eagles and hen harriers which continues to occur on or near many grouse moors.

Particularly important for us, there is more carbon locked up in Scotland’s peaty soils than in all the trees in the UK. The management of land for grouse shooting and the practice of burning moors risks releasing these locked-up climate-changing gases.

We’ll be involved as this campaign develops and new, better ways of using the land are proposed. Watch the introductory video for a look at the key issues.

Add your support to the campaign

We also: went to the UN climate conference; gave evidence at the Scottish Parliament; co-authored a report on barriers to environmental legal action; supported local campaign groups in Aberdeen, Edinburgh and Glasgow;  met with Councillors, MSPs and MPs; backed a Deposit Return Scheme and even found time to celebrate our 40th anniversary!

Become a member
This site uses cookies to store information on your computer. To find out how we use them please view our Privacy Policy.Accept AllNo Thanks
Manage consent